COP26: Protest actions around the globe target aviation “greenwashing” and call for a reduction of air traffic 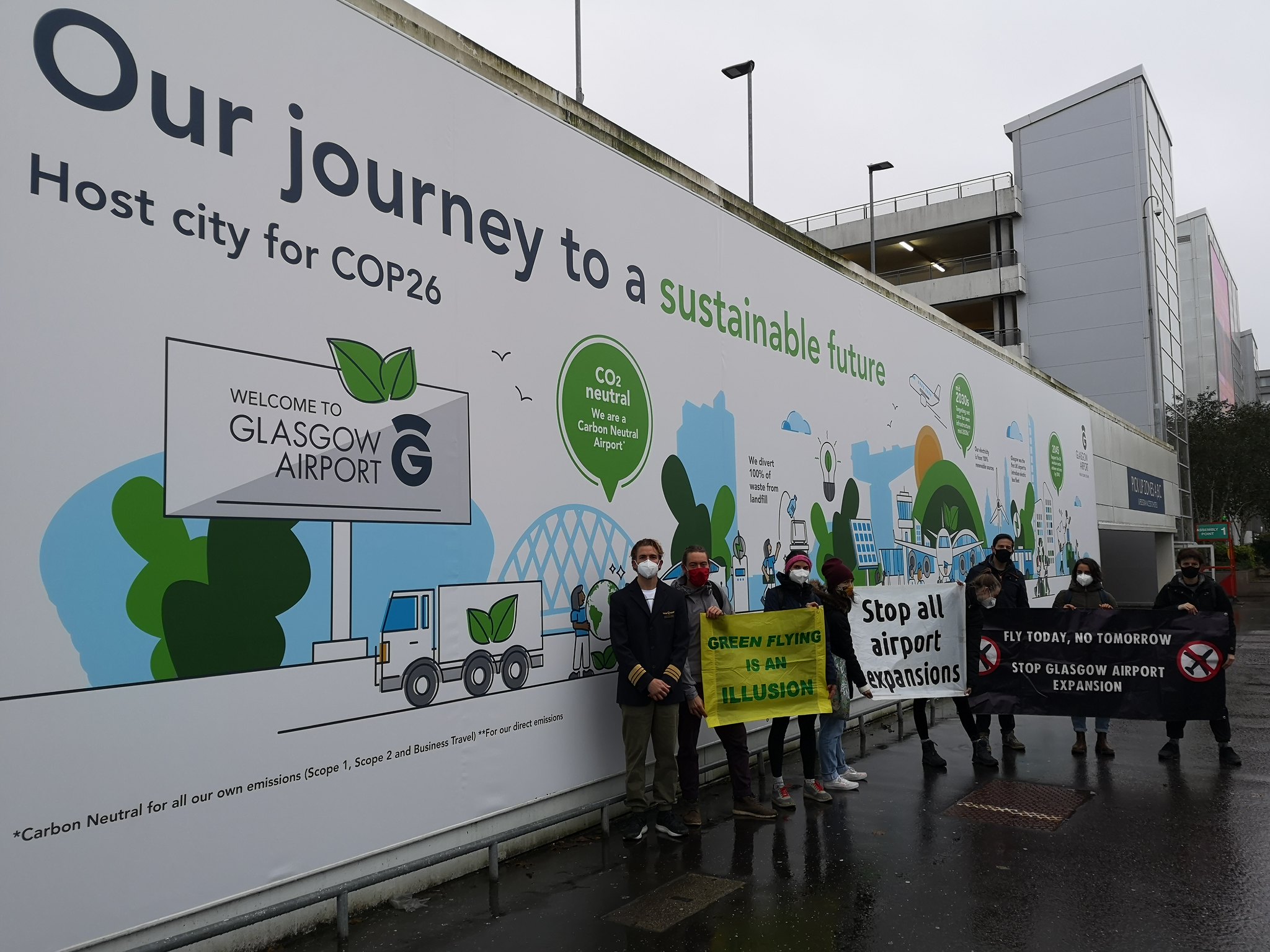 Glasgow, 6th of November — As Britain drafts its COP26 deal on global aviation emissions, civil society protest actions across the globe called for an end to aviation greenwashing and effective reduction of air traffic. The protests, coordinated by the Stay Grounded network, are part of the Global Day of Action for Climate Justice, during the UN Climate Conference COP26 in Glasgow.

In the UK marches, rallies, samba bands, bike rides, banner-drops and other creative protests are taking place against planned expansions for 10 airports: Bristol, Doncaster-Sheffield, Gatwick, Glasgow, Leeds-Bradford, London-City, Luton, Liverpool, Manchester and Southampton. “The illusion of green flying” was also highlighted at the march against greenwashing in Glasgow on November 3rd by pilots and activists dressed up as ‘greenwash busters’. At Glasgow Airport, activists protested with banners against airport expansions and greenwashing of aviation.

On November 4th, supporters gathered in Bobigny, France, in support of activists who painted an aeroplane green at Roissy airport in March this year, to highlight the greenwashing and climate irresponsibility of the French government. Their trial was stopped due to the violation of the activists’ rights.

Stay Grounded campaigners warn against attempts to greenwash aviation. New technologies and ‘sustainable’ fuels touted by the industry will not significantly reduce emissions for decades to come. Technofixes like electric planes, biofuels, hydrogen and synthetic e-fuels are either not yet developed or have constraints and adverse side effects. Ray Stewart from Stay Grounded UK stated: “We warn that trusting yet-to-be-developed technology to reduce climate-wrecking emissions is an extreme risk we cannot afford to take. Instead, we demand immediate action be taken to prevent aviation growth to cut associated emissions, for us to stand any chance of remaining within 1.5C.”

The UK is currently inviting countries to join an ‘International Aviation Climate Ambition Coalition’ that will be announced on Wednesday 10th, during COP26. Leaked drafts suggest the coalition would enforce action through the International Civil Aviation Organization (ICAO) and its mechanism CORSIA via non-binding targets and investing in so-called ‘sustainable’ fuels, instead of obliging countries to include aviation emissions in their Nationally Determined Contributions (NDCs) or budgets.

Mira Kapfinger from Stay Grounded outlined: “CORSIA heavily relies on problematic false solutions such as offsetting and so-called alternative fuels. These have already led to more exploitation of both people and the planet. Instead of avoiding their responsibility through an international mechanism that is too broken to be fixed, governments must take responsibility for aviation emissions in their NDCs. In a climate emergency, the only thing we can do right now to cut emissions from flying is to reduce air traffic”.

In Nepal, a youth protest at Simara Airport’s gate, in Bara district, will draw attention to the injustices related to air traffic on November 7th. “Nepal is one of the most vulnerable countries in the world due to climate change. Our campaign will sensitise local people, government agencies and the private sector to be more accountable and address the issues of injustice and the environmental crisis,” says Bhola Bhattarai from NAFAN Nepal.

In Frankfurt, a series of events, exhibitions, guided walks, a demonstration inside the airport and even a concert, celebrated the decade-long resistance against the devastating impacts of the major European airport, which led to successes such as a night flight ban. “Where there is oppression, there is resistance,” said Michael Flörsheimer, from BBI, the alliance of civil initiatives against the airport expansion.

“Any emissions reductions from technological developments will be eaten up by plans for expansion of the sector. Growth is the problem” confirmed Finlay Asher, an aircraft engine designer now leading the aviation workers’ initiative ‘Safe Landing’. He added: “That’s why no airport should be allowed to expand.”

Globally, the aviation sector plans to triple in size by 2050 – if this happens, we could see aviation fuel consumption and therefore greenhouse gas emissions double. Aviation is also one of the worst examples of climate injustice. Whilst a tiny minority – just 1% of the world population – are responsible for 50% of emissions from commercial aviation, more than 80% of the world’s population have never set foot on an aeroplane. In addition, the worst consequences of the climate crisis are affecting those who have flown the least.

The Global Day of Action for Climate Justice brings together movements from across the world to build power for system change with decentralised mass mobilisations. It was issued by the COP26 Coalition, the UK-based civil society coalition of groups and individuals mobilising around climate justice during COP26.

Stay Grounded is a global network representing 180 member organisations campaigning for a reduction of air traffic and a climate-just mobility system, including local and national airport and climate campaign groups.