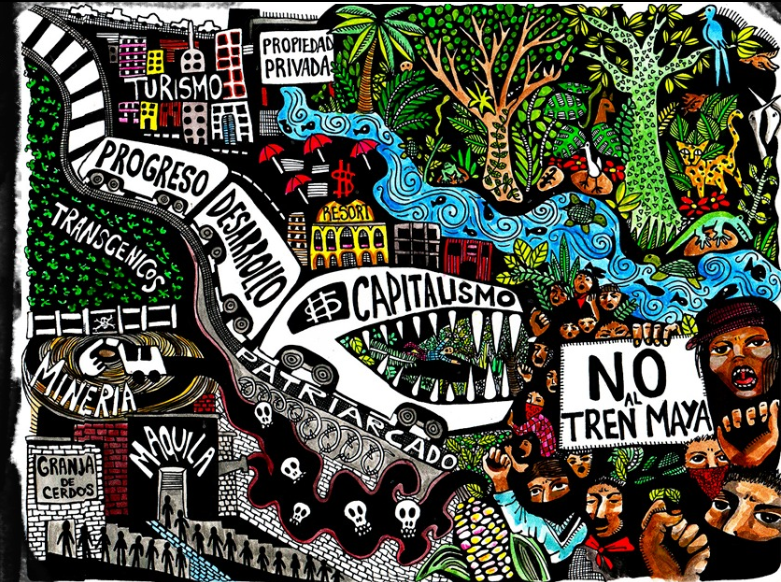 All around the world people from our member groups are fighting against new airports or airport expansions. But a just and climate safe mobility is not only about reducing aviation and airports. It is about building a transport system and infrastructure that supports the freedom of movement but at the same time doesn’t destroy local territories and the climate. So sometimes we also need to fight against new train projects like in the case of the so called Maya train in Mexico. We stand in solidarity with our member organisation “Coordinadora de Pueblos y Organizaciones del Oriente del Estado de México en Defensa de la Tierra, el Agua y su Cultura” who are opposing the Maya train for various reasons.

Read their statement below and help to share it and shed a light on this deadly project which also shows how tourism can destroy local communities and environment.

NO TO THE MAYA TRAIN !

The Mexican government wants to create a railway loop to link Mayan archaeological sites and seaside resorts in eastern Mexico.
The indigenous populations have been struggling for several years against this deadly project and have already succeeded in suspending it. Today, May 14, the Supreme Court of Justice of the Mexican Nation is due to rule on the final cancellation of the Maya Train and the mining operation.
Let’s support the struggle of the indigenous people of Chiapas, Yucatán, Quintana Roo, Tabasco  and Campeche  and show the Supreme Court and the Mexican state that the opposition against the Mayan Train goes beyond the borders of Mexico!
It is by mobilizing all over the world that we will defeat this project. The destruction of the environment, the exploitation and plundering of land and people and the corruption concern us all: whether it takes place near us or millions miles from our country.

Why am I saying no to the Maya Train? 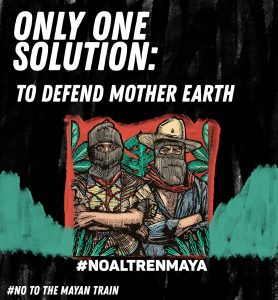