13 Grounded Holiday Destinations to Put on Your Bucket List 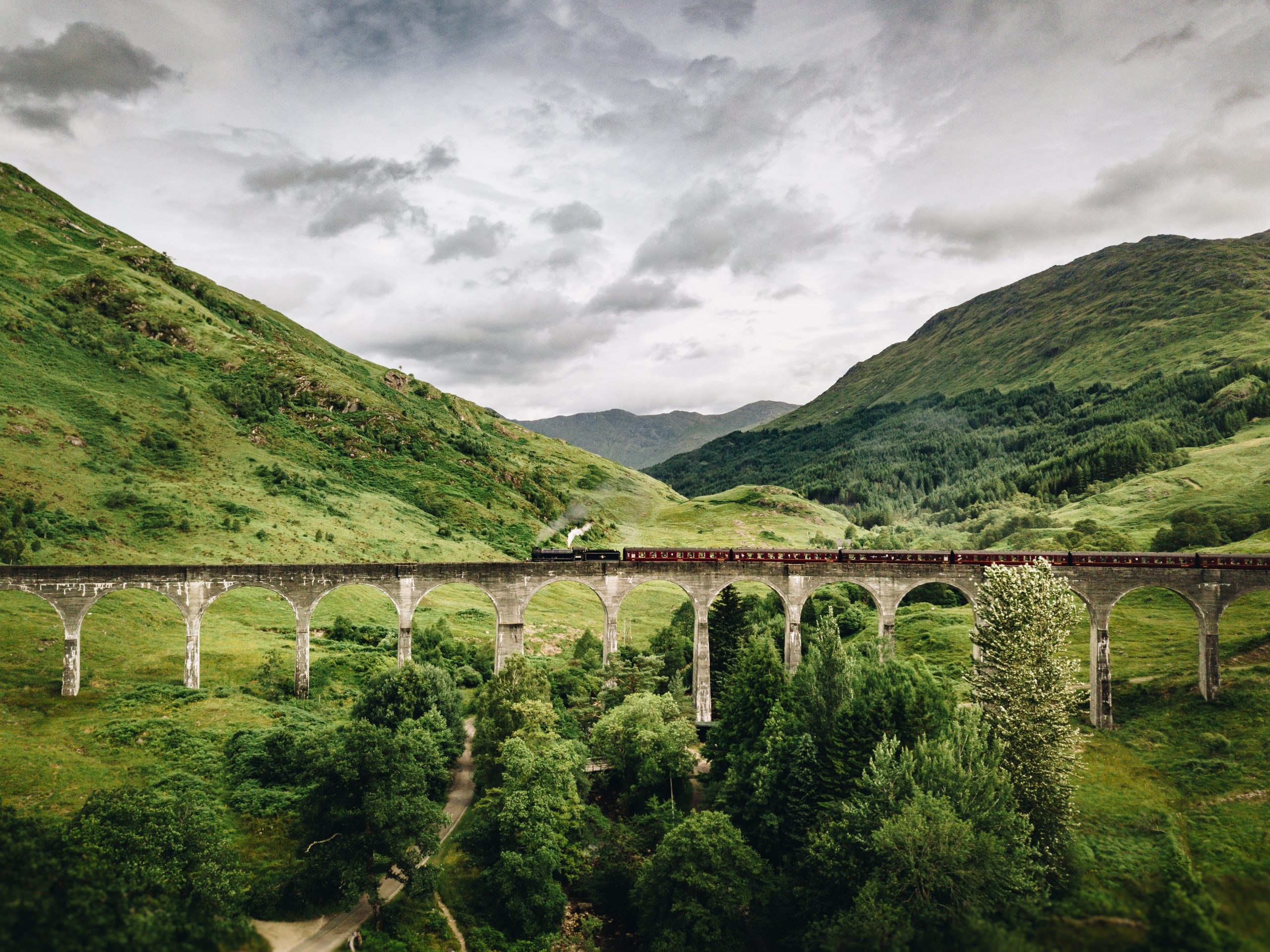 The original version of this article was written in Dutch by our Let’s Stay Grounded campaign partner Natuur en Milieu.

If you’re based in Europe, you don’t need to spend hours on an airplane to see the world’s most spectacular places. We provide you with some excellent alternatives for your bucket list of dream holidays, but a little closer to home.

There are many amazing places in the world to see: beautiful cities, brilliant architecture, splendid culture, and fabulous nature. As a travel-hungry globetrotter, you most likely want to see all of it with your own eyes. But as a grounded traveler, you may feel some disappointment as you can only reach most of these places by airplane. So, what do you do, if you pledged to stay grounded?

For your Bounty-island, there’s no need to travel to the end of the world. Did you know that there’s an island group at the most south-western point of England with a tropical climate? Traveling by train through the tunnel and a nice boat trip gets you there in no time. That’s away to save up some climate miles, right? It’s good to know that the c in Scilly is silent to make it a bit more fun. That’s the only thing silly about these islands, which are tropical and very nearby.

The Chinese wall is unique, but it has some downsides. It takes a long flight to get there, and it’s frequently very crowded. On top of that, the wall has been so thoroughly renovated that little of the original is left. Not ideal. Instead, travel to England and gaze upon Hadrian’s wall. This wall was built by the Roman emperor Hadrian in the years 122 to 128 after Christ as a fortified border to protect the Roman lands form “barbarian” tribes from the north of Brittannia (you know, Scotland). Pretty similar to the Chinese wall, isn’t it? It was the most northern border of the Roman empire and ran from east to west (might remind you of the Game of Thrones) for a total length of 117 kilometers. You can book wonderful walking holidays past this wall. And, most of it is still original.

The most exciting holidays sometimes start with different languages, when the sweat gathers on your upper lip as you receive a completely different meal than you’ve ordered. Be it in Dutch, or in Italian. But the colorful Willemstad in the Dutch colonies Cuaçaos are a couple tonnes of emissions further away than the similarly colorful Procida, Italy. Luckily, in Italy, a misunderstood order is never an issue (what you’ll get is bound to be good). Procida is literally a little smudge on the map with a size of only 4.1 square kilometers. About 1,000 tourists come ashore every year. Add to that the fact you can go Island-hopping around the so-called Phlegraean Islands in the Gulf of Naples. Did we mention the Italian food?

4. Swap the Californian terroir for the Loire

Nothing is as fancy as a wine holiday. You are rambling around the wine fields, from wine house to wine house. The coasts of California are known for its good soil and ideal climate for wine ranks. Now tell this to a Frenchman, and he’ll go berserk. Wine is French, zut alors! And many of these wines hail from the Loire region. It also has a lovely climate and great food. After about 3 hours from Paris, you can stretch your legs in this region. They’ll throw in a bunch of castles for free too!

5. Everglades? I’ll have the Danube

The Everglades is an oasis of peace until you get overrun by a hovercraft with one of those big propellers. Or what about those nasty alligators? No, we prefer the delta of the Danube river to Florida. Peaceful and just as beautiful. The Romanian Danube Delta is part of the UNESCO Man and the Biosphere program and has been on the list of World Heritage Sites since 1991. The delta is brimming with waterfowl and is, for that reason, also a Nature 2000-area. More than enough reasons to go roam around there in your canoe for a while.

6. Get the Thousand Lakes instead of the lakes of Canada

They call Finland the ‘land of a thousand lakes’ but it has, in fact, got over 188,000 of them! Like in Sweden and Norway, you can freely camp anywhere. All you need is to find a lovely spot on a lake’s banks, and you’ll have a spectacular view every morning. You can also see the famous northern light here, and we haven’t even mentioned the fantastic Finish saunas. You’re convinced now, aren’t you?

Iceland is beautiful and not even that far away, but you’ll have to fly there. If any of those volcanoes get restless, you may have a problem! Better stay ashore and grab the train to Bulgaria, where you’ll find similarly breathtaking landscapes. In the most north-western area, you’ll find the Seven Rila Lakes. Seven glacial ponds, surrounded by rugged landscapes. The local monastery, part of UNESCO’s list of World Heritage Sites, is worth seeing with its frescos. Most of the area consists of pristine forests, filled with animal life, and above the tree line, you’ll find chamois and stone eagles.

The Grand Canyon is one of those places many people believe they must visit. Nice, but it’s not all sunshine and rainbows in the Western States. Let’s be frank; it’s a lot of the same. To top it off, the Grand Canyon is on the list of deadliest holiday destinations; 12 people die there every year. No, we prefer the Torcal De Antequera, a nature reserve in Andalusia. This karst mountain range contains a lot of unique flora and fauna. Oh, and there’s only one reported death, so a relatively safe spot!

9. Safari in a primordial forest instead of on the Savannah

Do you see the difference between these two images? Exactly, you might as well see the bison in Białowieża instead of wildebeest in Kruger park. By the way, there are piles of wildebeest around, whereas bison are much harder to find. Białowieża on the border of Poland and Belarus is the last piece of primordial forest in Europe, making it absolutely unique. If you’d like to see the big 5, you can search for the wolf, lynx, otter, and the red deer. Białowieża is also a UNESCO World Heritage Site. So no need for the Savannah…

No question for us! New York is probably on your bucket list. But like almost anything, you might need to refresh that list. Stockholm is hip and happening. It’s the stomping ground of upcoming Swedish designers. They even use the same cool abbreviation as the New Yorkers; there’s SoFo (South of Folkungatan), described by Vogue as one of the world’s hottest hip neighborhoods. You also need not miss the waterways, because like Manhattan, Stockholm is surrounded by water. It’s the Venice of the north (how many of those do we have now?) and has 24,000 islands. Whåt’s keeping you?

11. Aquatic adventures: not Thailand, but Croatia!

Croatia offers another gem from that UNESCO list of World Heritage Sites. Plitvice, near Zagreb in Croatia, is a pure water paradise. Kilometers of platform bridges and countless clear, green-blue pools. You can’t go swimming here, but in the nearby (almost as beautiful) National Park Krka you can! A great alternative that saves you 8,000 kilometers of travel as well!

12. Summer Palace in Beijing or Sommerpalast?

For picturesque bridges, you don’t need to go to the other side of the world. For example this one in the east of Germany: the Rakotz Bridge, or Devil’s Bridge. This bridge is over 150 years old, and due to the surrounding park, which is filled with rhododendrons and azaleas, you’ll feel like you’re actually in Asia. If needs must, you’re likely able to find a Chinese restaurant nearby to complete the day.

13. Experience your very own Lord of the Rings on Skye

This one is on everyone’s bucket list, right? The ‘real’ Middle Earth they recorded in the movie (the setting of Lord of the Rings) may be in New Zealand, but you don’t need to travel all the way there to experience a rugged landscape filled with majestic mountains. The Isle of Skye, or simply the Skye island, is part of Scotland and, in comparison, just around the corner. You can even get all the way there by train, which comes highly recommended. If you make sure to take a hike along the West Highland Way, with a view on the Jacobite steam train (see photo on the top), you’ll feel like in a Harry Potter as well.

Want to know how you get to these places? Check out best booking systems here.