Action Weeks 2016
Resistance against airport and aviation expansion is growing all over the world. Nevertheless, aviation industry and governments decided from September 27th to October 7, 2016 at the conference of the ICAO (International Civil Aviation Organisation) on how to get out of the need to address climate change within aviation. Their plan: unlimited growth, combined with offsets. This means theyhey claim they can reach “carbon-neutral growth” by paying others in the Global South to reduce their emissions. But offsets lead to more problems than they solve. They are a license to pollute. They increase emissions, often lead to violations of human rights, put the climate mitigation burden on the shoulders of people in the Global South, and distract from real solutions. Emissions need to be cut at the source.

Airport Actions around the world

Coinciding with the ICAO conference, local affected people, action groups and networks from around the world, organized the global action days. Actions took place in Austria, Mexico, the U.K., Canada, Turkey and France and Australia. There are many more groups around the world resisting the unnecessary expansion of the destructive aviation industry. Neither aviation nor climate change take any notice of national borders. We stand in solidarity with communities who are also fighting devastating airport projects all over the world. [Download Press Kit] 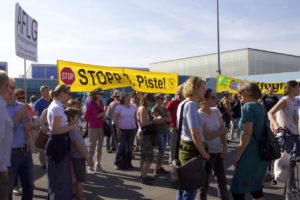 The third runway at Vienna Airport would be Austria’s worst climate-wrecking infrastructure project, turning Vienna into a central airport hub. Our climate justice group ‘System Change, not Climate Change!’ therefore called for a day of action against further airport expansion on October 1st. A bicycle demonstration with almost 200 people drove from the Vienna city centre right to the airport. There, the bike block was joined by local citizen groups – fighting the new runway for more than a decade. Around the action day, we organized the first climate camp in Austria from September 29 – October 2. At the camp close to the airport, the camp provided a space for workshops, discussion and networking on climate justice and sustainable mobility for its over hundred participants. 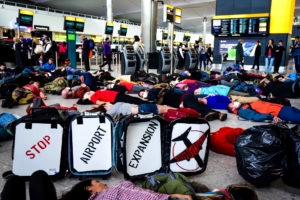 In the UK, after years of delay, the controversial announcement of a new runway at a London airport is expected this October, making a mockery of the UK‘s legally binding commitments for action on climate change. On Saturday, 1st of October, “Reclaim the Power”, a grassroots network for taking direct action on environmental, economic and social justice issues, organized a day of action against airport expansion. with a family-friendly flashmob, a critical mass bike block and smaller creative actions. Themes of the day were amongst others the affluent minority who is driving the so-called ‘need’ for aviation expansion, and the 300,000+ people who are already suffering from the effects of climate change, and who are paying the price of this luxury lifestyle with their lives. https://reclaimthepower.org.uk/aviation-flashmob-critical-mass/

The native communities living on the shores of Texcoco Lake outside Mexico City have experienced extreme state repression for daring to resist the construction of a new six-runway airport on their land. Their courage and firmness, with the solidarity and support of NGOs, indigenous communities and people from both within and outside Mexico, managed to stop the original plans in 2002. Now the project has been revived and the communities and towns across the Valley of Mexico have coordinated to resist it. For the Global Action Week a number of events are planned from September 29 to October 1st including public meetings, an academic forum and a visit around the affected area guided by ejidatarios (affected farmers). A photo exhibition against an illegal heliport on farmland, scheduled for September 29 at San Gregorio Atlapulco-Xochimilco, Mexico City, had to be cancelled due to heavy rainfalls and floods on September 25 that affected 600 households in the area. Local farmers emphasized that such events will increase due to climate change.

On September 30th the academic and community forum „In defence of life and heritage of Texcoco Lake“ took place at the National Autonomous University of Mexico (UNAM). Videos of this event can be found here: 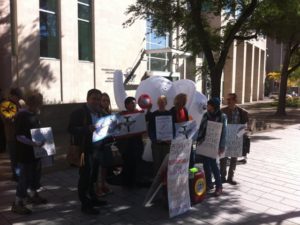 The People’s Coalition for Responsible Civil Aviation, a group of concerned citizens in Montreal, made their point clear as the ICAO’s 39th Assembly started on September 27/28: To keep in line with the goals of the Paris Agreement real change is needed right now. That the plans for a so-called “carbon-neutral growth” through offsets will not be a real solution to tackle climate change was one of the major points of the demonstration and leaflet-distribution organized in Montreal.

On top of that, the activist group also convened a press conference on the closing day of the ICAO’s Assembly on October 7, joined by an big inflated elephant to represent the elephant in the room: aviation emissions. The contact was established with ICAO employees to directly challenge the greenwashing, and a solidarity action with la ZAD was also organized in parallel by another group.

France: Notre-Dame-des-Landes: Defend the ZAD – A Call for International Solidarity 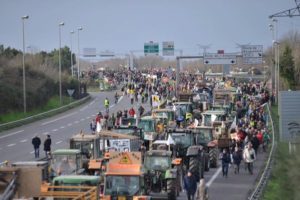 For over 50 years, farmers and locals have resisted the building of a new airport for the French city of Nantes (which by the way already has one). Radicals from around the world, local farmers and villagers, citizen groups, trade unionists and naturalists, refugees, runaways, squatters and climate justice activists and many others, have organised to protect the 4000 acres of land against the airport and its world. Government officials have coined this place “a territory lost to the republic”. Its occupants have named it: la zad (zone a défendre) zone to defend.

The French government has said it now plans to evict the entire site and start construction works this autumn. A mass mobilisation is therefore being organised for the 8 – 9 October. Now, the entire zone is due for expulsions to start the construction of this absurd airport. Prime minister Valls has promised a “Rendez Vous” this October to evict everyone who is living, working, building and farming on the zone. See: http://zad.nadir.org/spip.php?article4024

„We are calling on all international groups and movements to either come to the zone on October 8th or show their solidarity with the zad through actions directed at the French government or multinational Vinci in their own towns and cities on that day. The airport will never be built. Life on the zad will keep on flourishing!“ 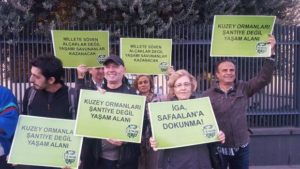 Work has already started on Istanbul’s third airport, which is expected to destroy a staggering 76km² of farmland, forests and lakes. It’s being celebrated as the biggest in the world by politicians but strongly opposed by a coalition called the Northern Forest Defence (NFD) a movement that advocates for the protection of the ecologically interconnected and diverse area extending from Sapanca to Strandzha Mountains with its focus on northern Istanbul. A mining project to provide granite for the new Airport started on Monday, September 26 in the middle of the northern forest. Opposing this, NFD held a press statement at the same day in front of Cengiz Holding, one of the companies building the new airport. Approximately 50 protesters and 200 police officers attended. 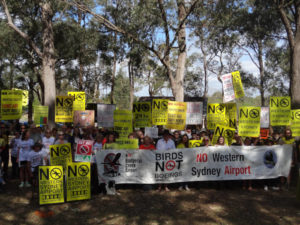 The flight paths of the planned Western Sydney Airport would affect more than 2 million people, while the existing Sydney Airport operates well below capacity. The community in Western Sydney has been subjected to 2 years of media and political misinformation that has focused on a small number of benefits and ignored the horrendous impacts that the project will have. RAWSA is committed to informing the communities about the true situation, confident that awareness will drive the necessary political pressure to stop the airport being built and to use the site for more beneficial, sustainable and environmentally friendly development. RAWSA joined the global action week with a photo-shoot on October 8. Approximately 60 members gathered in a local park to send an image of support. Also, Peter Dollin, President of RAWSA, sent a letter backing community groups who are fighting airport issues around the world. The letter also includes a summation of RAWSA’s issues with government plans to construct a new airport in Western Sydney. 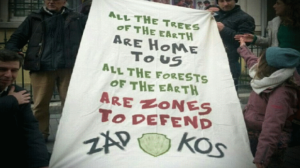 Solidarity message from Northern Forest Defence, Turkey, to defenders of live all around the world: http://www.kuzeyormanlari.org/2016/10/03/solidarity-message-from-nfd-to-defenders-of-life-all-around-the-world/

Land Over Landings, defending the Federal Lands of north Pickering near Toronto, Canada, joined the global action week with this article: http://landoverlandings.com/stay-grounded-global-action-week/

Many night train lines are currently being shut down, especially in France where almost all of them are threatened to be switched off in the next years. It is a pity:  they are a great alternative to planes , (especially short-distance flights within Europe) and one of the answers to the climate change challenge. “Ouiautraindenuit” is a collective supported by more than 35 organizations fighting for the night train. They have a position paper, a petition with more than 15.000 signatures and are regularly organizing actions. They want policies encouraging the night train with better price systems and a better planning of train lines. 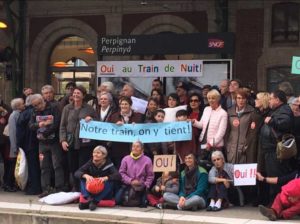 On October 15th, as part of the global actions days, they organized an action in Perpignan’s train station. 200 people joined to welcome the people coming with the night train and brought them breakfast. They received positive media attention.

For more information (in French) : https://ouiautraindenuit.wordpress.com/