Stockholm, August 13: On the 11th of August a group of climate activists disrupted the delivery of aviation fuel to Arlanda airport outside Stockholm, Sweden by blocking 14 tank cars of fossil fuels from entering the station. Activists of the local campaign Flyglarm Arlanda peacefully trespassed into the fuel station, to challenge the expansion of the airport.

The cargo company closed down the facilities for 24 hours for safety reasons after the activists had entered the area. The activists had informed the management that they would stop the fuel train from running in, and thus managed to disrupt the fossil fuel delivery without even entering the train tracks. 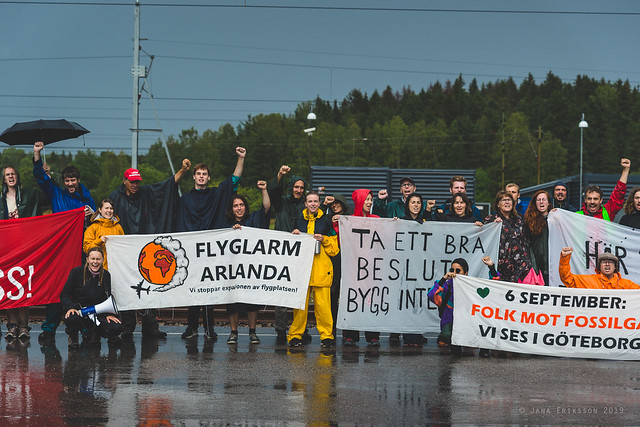 Since 1990 climate emissions from international flights taken by Swedish residents have increased with 61 % and no realistic strategy to decrease the emissions caused by the aviation industry have been presented. This makes aviation one of the sectors where emissions are completely out of control. Still the Swedish national government let the state-owned airport company continue with their plans of expanding Arlanda’s capacity, with the goal of doubling the number of passengers until 2050.

“With the techniques and the resources available today, the emissions from the aviation sector can only be managed through a decrease in air travels. In an already ongoing climate crisis we have no time to wait for the supposed future technology that the airport company hopes will solve the problem. Emissions must immediately and radically be decreased in all parts of society,” said Samuel Jarrick from Flyglarm Arlanda.

“We are well aware that we wont stop any planes from taking off with our action today. But by temporarily disrupt the delivery of fossil fuels to the airport, we wish to draw attention to the dirty business of fossil fuels that are still part of all air travels. We are here today because we know that an expansion of the airport means an increase in air travel, which means even more tank cars of fossil fuels, which means heavier climate emissions. We won’t accept that,” said activist Agnes Lansrot.

The Swedish government were expected to give green light for the next step of the expansion sometime during spring 2019, but no further plan has been presented yet. Instead ministers have been making vague statements like: “we have to look further into this question…”.  This might be because the two ruling parties cannot agree on the airport-issue, where the social democrats support an expansion while the green party is expected to oppose it, though they still have not given a definite answer on the matter.

“This disagreement between the two ruling parties means it is time for the Swedish climate movement to level up the resistance and make clear that airport expansions are not supported by the people,” said Anna Johansson, who also took part in the action. “Everyone who joined us today show that more and more people are ready to disrupt climate harming operations. This is only the beginning.”

Photos for free use

is a campaign working to stop the expansion of Arlanda airport in Stockholm. They are members of the Stay Grounded Network.
Website https://flyglarmarlanda.se/
Facebook https://www.facebook.com/FlyglarmArlanda/
Twitter @FlyglarmA

Stay Grounded is a global network to build a socially just and ecologically sound transport system and to rapidly reduce aviation. Almost 200 groups and organizations from all continents support its positions, more than 130 of them are active members.
Website https://dev.stay-grounded.org/
Facebook https://www.facebook.com/StayGroundedNetwork
Twitter @Staygrounded3