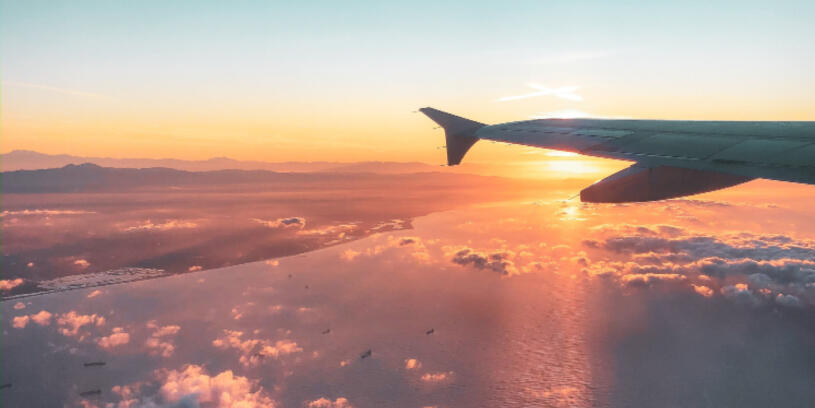 The French think-tank The Shift Project, in collaboration with an aeronautical engineers’ collective, has modelled the future of air transport on a global level and, more specifically, in France. Their conclusion is clear: neither the changes nor the technological breakthroughs planned by the sector will be enough to reduce its impact on the climate within a timeframe compatible with the climate emergency. The unbridled growth of air transport will have to stop and, in all likelihood, traffic will have to decrease. And the sooner it does so, the less painful it will be for the people who earn their living by it.

Following on from its first report on aviation, published in May 2020, the French think-tank The Shift Project has published a second, released in March 2021. The new report, “Flying in 2050: What kind of aviation in a constrained world”, (English Summary) pursues and develops the previous report’s analysis. The editorial team, made up of some thirty professionals from the sector – engineers, pilots, air traffic controllers, airline employees – includes members of SUPAERO-DECARBO, a collective made up of students and graduates from ISAE SUPAERO, a prestigious French school in the aerospace sector. The report cannot therefore be considered the work of aviation “bashers”, but of men and women who, while passionate about aviation, are refusing to ignore the undeniable realities of climate change. “Climate-conscious aero-enthusiasts”, as they describe themselves. A three-hour webinar in French accompanied the release of the report in France – with contributions in English, around the two-hour mark, from Todd Smith and Finlay Asher, Stay Grounded regulars and co-founders of “Safe Landing”.

This new report, more fleshed out than the first, is underpinned by a basic proposal: the need to introduce a carbon budget for air transport, which would represent the total amount of CO2 that the sector could emit by 2050, and provide a framework within which the effectiveness of the measures adopted could be assessed. As this does not currently exist, the Shift team calculated a budget for the purposes of the study based on the following IPCC scenario: “Limiting temperature rise to +2°C above pre-industrial levels with 67% probability”. Using IPCC data, and defining the carbon budget for commercial aviation in proportion to its 2018 emissions, while estimating the sector to be responsible for 2.56% of global CO2 emissions, the Shift Project determined a budget of 21.6 Gt CO2 for the world as a whole (and 536 Mt CO2 for France), for the period 2018-2050.

Based on these budgets, the Shift Project has modelled two scenarios to check whether the sector’s growth estimates are compatible with the defined objectives. The hypothesis adopted, based on projections by the International Air Transport Association (IATA), is that traffic will return to its 2019 level in 2024, and subsequently increase by 4% per year up to 2050.

A closer look at two scenarios

The first scenario, named “MAVERICK” by the authors of the report, is intentionally extremely optimistic regarding technical improvements and the development of breakthrough technologies. It also assumes choices and trade-offs that are largely favourable to the sector, as well as significant and immediate investments. In particular, it supposes that, in 2035, hydrogen-powered aircraft will be in service, and that long-haul aircraft will be able to fly on 100% “alternative” fuels. Moreover, the scenario considers that these fuels will be produced in abundance and will be entirely dedicated to the aviation industry. Aside from the extreme unlikelihood of this scenario, the problems associated with the proposed technologies raise many questions that are left unanswered. The Shift Project does recognise, however, that this highly optimistic scenario deliberately sidesteps a number of economic and energy constraints, as well as problems associated with the supply of alternative fuels or the availability of airport infrastructure.

As for the electricity required to produce the new decarbonised fuels and hydrogen, the report estimates that, for France, this would necessitate the equivalent of approximately 8 times the total French wind power capacity in 2019. Or, in other words, the equivalent of about 40 nuclear reactors… (The report carefully avoids this comparison, so as not to raise the controversial question of nuclear power).

The second scenario, “ICEMAN”, is intended to be more realistic, but its hypotheses remain nevertheless optimistic. However, despite their inherent optimism, when the two scenarios are put to the test of the previously established carbon budget, neither of them is found to be compatible with a growth in traffic of 4% per year. According to the models, on a worldwide scale, the growth rate from 2025 onwards should not exceed 2.52% per year in the “MAVERICK” scenario, while a decrease of 0.8% per year would be necessary in the “ICEMAN” scenario. For France, the disparity is even greater: growth not exceeding 0.71% for “MAVERICK”, and a decrease of 1.75% necessary in the case of “ICEMAN”.

Weaknesses in the scenarios

It should be noted that the Shift Project considers the budget chosen for the study (aiming to keep the increase in temperature below 2°C with 67% probability) as the maximum possible budget that might enable the Paris agreement to be respected. The same budget would give less than a 20% chance of staying below 1.5°C. Besides, even at 67%, there is a one in three chance of the target not being met.

Furthermore, although the Shift Project recognises the existence of aviation’s “non-CO2” effects – and indeed proposes that the French Civil Aviation Authority (DGAC) produce a total emissions indicator in Mt CO2eq – these effects are not considered in the calculations used in the study.

Finally, both scenarios take into account the forthcoming mechanisms of the controversial, not to say discredited, Carbon Offsetting and Reduction Scheme for International Aviation (CORSIA), even extending it to domestic flights.

Of course, if we started from less optimistic scenarios, adopted more restrictive budgets that targeted an increase in global heating of no more than 1.5°, and if we took into account non-CO2 effects, air traffic would have to decrease at a much greater rate. Nevertheless, the study clearly demonstrates and confirms that a return to pre-COVID growth levels is totally unrealistic and unsustainable.

The report discusses other factors specific to the sector, such as the fact that air transport remains essentially the preserve of a wealthy minority. In 2018, 1% of the world’s population was responsible for 50% of aviation emissions. Of course, such considerations would have a bearing on the intersectoral trade-offs required in defining carbon budgets (the total budget being non-negotiable as it is physically determined).

The report also studies the impact on jobs in France. It underlines the importance of anticipating the consequences of a decline in traffic, and of not delaying the conversion and diversification of the sector, in order to avoid future crises and, in particular, a “Detroit syndrome” in the Toulouse region. Postponing action, by allowing traffic to return to pre-pandemic levels, would make it possible to avoid workforce reductions in the short term, but would further jeopardise employment in the long term. Any delay in implementing measures to limit or reduce traffic would be paid for by greater sacrifices in the future.

The report advocates a number of short-term operational efficiency measures, while recognising that their impact is limited. It also discusses the rapid implementation of less carbon-intensive solutions, such as phasing out air travel where a rail alternative exists in under 4½ hours. But it also recognises the need to go even further in terms of sobriety, and considers other proposals designed to achieve this. This awareness of the need for strong measures contrasts sharply with the “Climate and Resilience” bill, currently going through the French parliament – a text totally lacking in ambition that, despite the recent court judgement against the French State for climate inaction, would not enable France to meet its obligations in terms of emission reductions. In aviation, as in other areas, the proposals made by France’s Citizens’ Convention for Climate that, according to President Emmanuel Macron, were supposed to be presented to Parliament “unfiltered”, have been watered down or simply abandoned.

The Shift Project concludes its report by acknowledging that, while technological innovation might be essential to decarbonising the aviation industry, any credible scenario requires the curbing of traffic growth, whether it be imposed, natural or planned. More realistic scenarios would even require a sharp decrease. The think-tank hopes to have contributed to a lucid analysis of the situation, and calls for an in-depth democratic reflection on the place of the aviation industry in a low-carbon world.