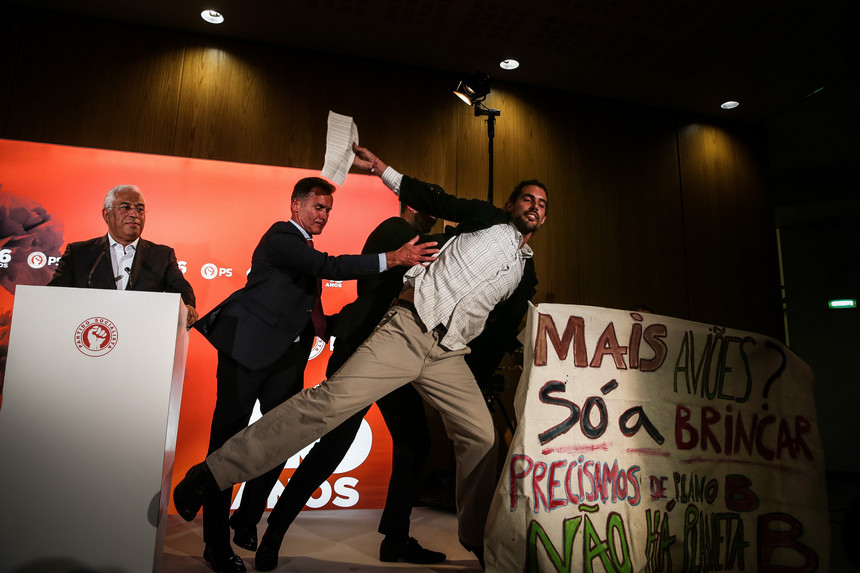 An unbelievable ruling by the Court of Appeals has reversed the decision of the Lisbon Local Criminal Court. Last February the court acquitted Francisco Pedro, a journalist and activist of Stay Grounded member ATERRA. Pedro was initially charged after interrupting a speech by the Portuguese prime minister in order to publicly denounce the expansion of Lisbon airport.

On an evening in April 2019, while the Portuguese Socialist Party’s (PSP) celebrated their anniversary, activists stormed the party, taking the crowd by surprise by sending paper aeroplanes fluttering around the room and hanging a banner that read, “More aeroplanes? You gotta be kidding! We need a plan B, there is no planet B”. As the activists hung the banner, Francisco Pedro tried to take the floor while prime minister António Costa was speaking, but he was violently removed by security guards. This act of violence had a public impact: for the first time, the media covered the protest against the planned expansion of Portela Airport and the new Montijo Airport, two environmentally destructive projects. Two years later, Francisco was tried for “qualified disobedience” and for “disturbing public order and tranquillity” since he had not “communicated the holding of a demonstration to Lisbon City Council”. A crime punishable by up to two years in prison.

In the three-month trial, the judge considered it unproven that Francisco Pedro was the organiser of the protest. In addition, she questioned the legitimacy of a 1974 law, made prior to the 1976 Constitution itself, which says that the demonstration had to be registered and that the public authorities had to be notified prior to the event. However, the right to freedom of expression, assembly and demonstration is protected by the Constitution from 1976 “By the wording of Article 45 of the Constitution of the Portuguese Republic, the possibility of restricting those fundamental rights is not provided for, and the aforementioned Decree-Law No. 406/74 raises doubts as to its constitutionality,” she said. In other words, the Portuguese constitution does support restricting or limiting the rights of freedom expression, assembly and demonstration and this should be enough to annul the 1974 law.

“The peaceful demonstrators are exercising a fundamental right”, the prior notice to the municipal council is “a mere procedural requirement”, and in the acquittal sentence it was also noted that “a demonstration should not be subject to an interruption order” for lack of prior notice.

The Public Prosecutor’s Office (MP) waited until the last day of the legal deadline and, in early April, surprisingly decided to appeal the decision, alleging a “wrong weighting of evidence”. The Public Prosecutor ignored the non-police witnesses and stuck to the testimony of the then head of the PSP, who identified Francisco Pedro as the instigator of the action.

With this ruling by the Court of Appeals, which is based on supposedly incontrovertible evidence concerning the organisation of the protest, the case will have to return to the first instance for a new trial. This is yet another chapter in a legal persecution and waste of public resources that has lasted for more than three years.

“This lawsuit is not to intimidate me: it is to intimidate all of us. It’s to tell us: ‘You only have freedom of expression up to the point where it doesn’t bother vested interests. You can only express yourselves if it doesn’t serve to change anything.’ I trust in our courage and creativity to not allow ourselves to be intimidated, to continue building alternatives, to interrupt the arrogance of the elites and to stop the ecocide – be it the expansion of airports, tourist complexes, monocultures or mines.” 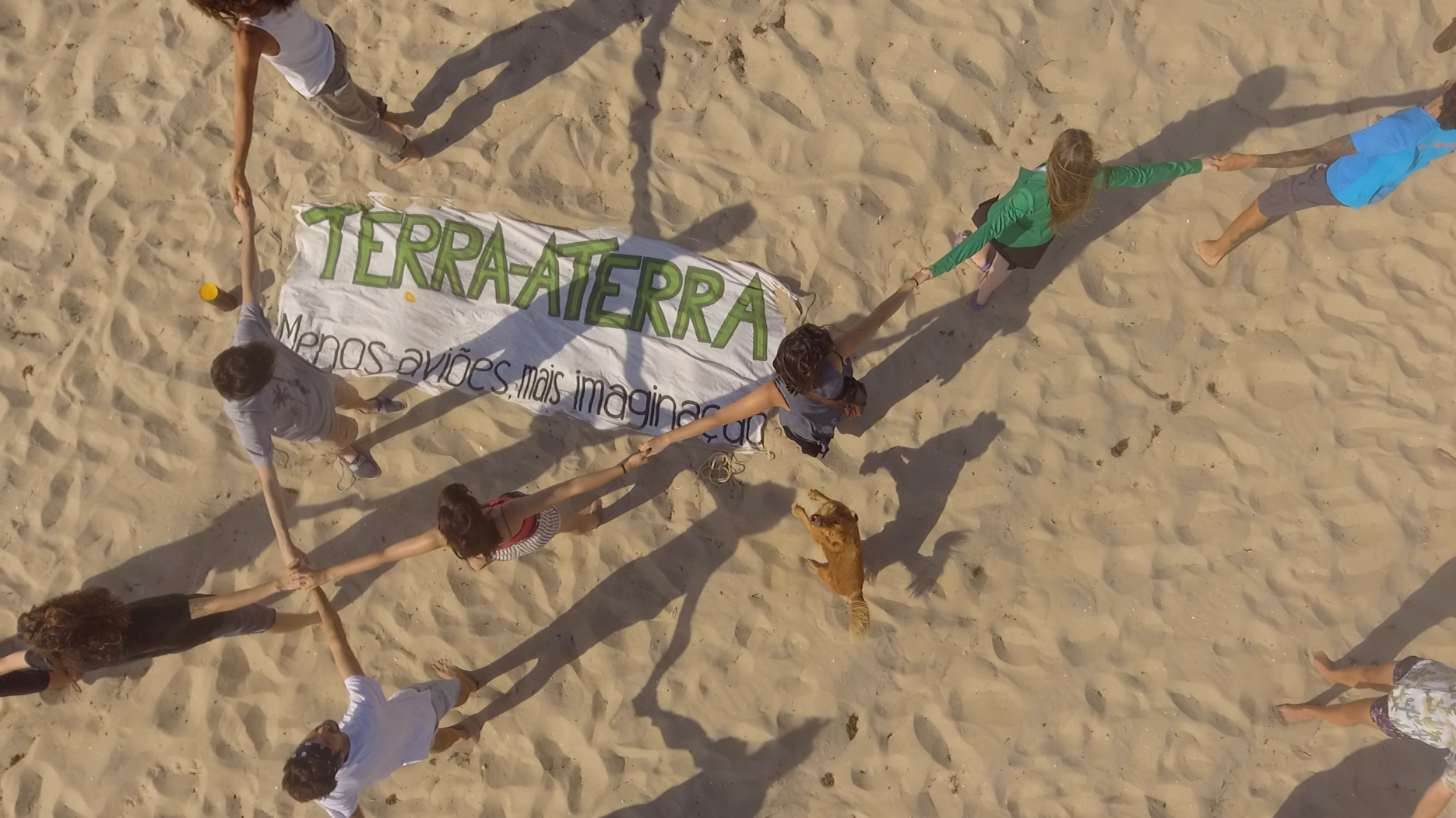 Judging the defenders of the Earth, or those responsible for the ecocide?

The intimidation of human and Earth rights defenders through legal proceedings is known as ‘SLAPP’ (strategic lawsuit against public participation). It is a scandalous but common practice by large corporations. These are legally and morally unreasonable accusations, where the aim is not to win the case, but to keep activists’ hands tied and silence criticism while the process drags on.

The Portuguese government and the aviation lobby have been particularly creative in trying to impose an expansion of Lisbon’s airport capacity by using the SLAPP. The strategy works by going back and forth with biased environmental assessments, trampling the law and the will of the people and by persecuting activists.

But, as ATERRA proposes and demonstrates in the report, “Degrowth of Aviation”, talking about a climate that allows the future of the human species on Earth implies talking about fewer planes in the air, fewer and smaller airports on the ground. It means talking about more railways and more environmentally friendly public transport. The heat waves and fires we have seen this summer are a direct consequence of a system that drives up emissions. Not only does this system continue to emit but also plans to increase emissions, as evidenced by the absurd idea of expanding airports and building new ones.

ATERRA, which brings together more than twenty Portuguese organisations that defend the decrease in aviation and fair and ecological mobility, calls on all people to mobilise in the face of this real crime. The intentions of the Portuguese government and the concession holder of Aeroportos de Portugal, the multinational company called Vinci, must be stopped as they threaten a healthy climate and the ecosystems that all of us depend on in the name of profit for a few. People, like Francisco, who denounce ecocide must be supported.