First success and next round: Global Solidarity with Protests against Karad Airport Expansion 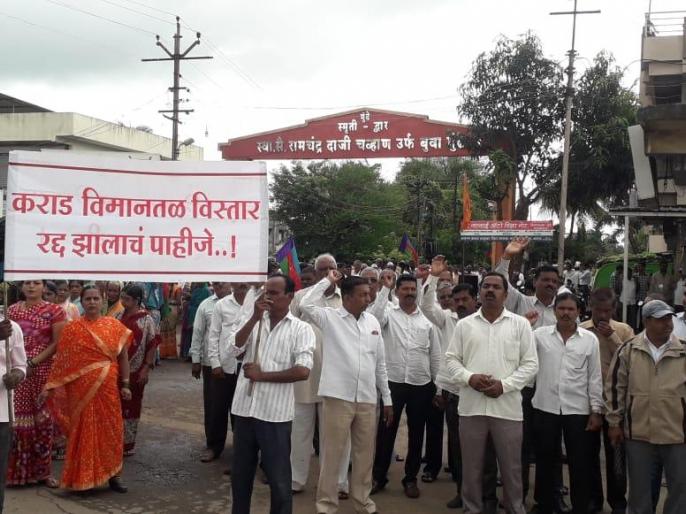 On September 19, the Stay Grounded Network had sent out an open letter to the Prime Minister of India and representatives of Maharashtra State in support of the affected farmers and citizens protesting against the expansion of Karad Airport. Even though not having received a direct response, Stay Grounded was informed that the letter did have an impact: local authorities finally started to listen to the concerns voiced against the project of expanding an existing airstrip into a full-fledged airport next to the city of Karad.

Whilst this is an important first step, the Stay Grounded Network sent a second letter – on behalf of its more than 150 global member organisations – on December 19. This follow-up letter reiterates the reasons, why the network fully supports the demands of the Karad Airport Expansion Opposing Task Force for political action to be taken to stop the project.

The struggle against Karad airport expansion is a struggle for life

From 2011 onwards, affected farmers have been protesting against this project that puts 3,200 acres of fertile land and the livelihoods of about 25,000 people under threat. In the most recent protest, from July to September 2019, affected farmers staged a sit-in for 50 days and nights in front of the Satara Collector office, sacrificing their agricultural work and family responsibilities to stop the land acquisition for the planned project. Read more about the airport conflict on the Environmental Justice Atlas.

Open Letter sent to the Prime Minister of India

On behalf of the Stay Grounded Network, I am writing to follow-up our Open Letter sent on September 19th 2019, raising our concerns about the planned environmental and socio-economic destruction by the local authorities of Maharashtra State and the Maharashtra Airport Development Company Limited – as a state owned company. We wrote the previous letter as well as this one in support of all affected farmers and citizens protesting against the expansion of Karad Airport in Maharashtra State.

Even though we have not received a direct response to our letter, we were informed that after the letter was sent out, local authorities finally started to listen to the concerns against the airport expansion. Whilst this is an important first step, kindly let me reiterate the reasons, why we fully support the demands of the Karad Airport Expansion Opposing Task Force for political action to be taken to stop this project.

On behalf of the Stay Grounded Network, I send our congratulations on your recent election as the Chief Minister of Maharshtra State! I am Co-founder of the Stay Grounded Network and its Campaigner. Stay Grounded represents 150 member organizations on all continents, working together to bring forward a just, environmentally sound transport system and to rapidly reduce air travel. Even more organizations, including large networks such as Friends of the Earth International, support our position paper. You are surely aware of the longstanding protest against the expansion project of an existing airstrip into a full-fledged airport next to the city of Karad. Since September 2019, we have been in close contact with with the Karad Airport Expansion Opposing Task Force and with this letter want to stress our continuous support for their struggle.

From 2011 onwards, farmers have voiced their opposition against the expansion. The latest sit-in protest started on July 29th 2019 and was carried out for 50 days and nights in front of Satara Collector Office, sending a strong signal to stop the project, as for the affected farmers this is a struggle for life. The farmers’ complaints were also submitted in detail to the local authorities (SDM Karad, Satara Collector and CMO office), but without their concerns being taken into account. We urge you to meet the farmers’ demands and prioritize the safety and rural livelihoods over the development of non-viable infrastructure, that serves particular political interests, involves safety risks and is non-compliant with policy, as described below.

We learned with great concern, that for the airport expansion 3,200 acres of fertile land are under threat. The farmers claim that the expansion will not help the development of the district, but on the contrary, lead to their impoverishment; For the expansion, fertile farm-land cultivated with an irrigation-system will be acquired. Critical infrastructure for the irrigation system is located on this land. According to the farmers’ spokesperson, Vinayak Shinde, people from the villages of Warunji, Kese, Munde, Padali, Gote and Supane have worked for more than 50 years to develop this irrigation scheme. We have been informed that if the land acquisition is carried out it will be a huge loss for about 25,000 people who depend upon this agriculture.

A pre-feasibility report (see Government of Maharashtra Report No.2, 2017, p.61-62) raised concerns regarding commercial viability due to the close proximity (70km) to the operational Kolhapur airport. The Maharashtra Airport Development Company Limited even proposed to withdraw the project because of commercial non-viability.

Karad Airport lies just two kilometers away from the city of Karad. We have been informed that, according to the Airports Authority of India, developments of airports should be at least 15 km away from a city. Farmers opposing the airport expansion are concerned that acquisition of irrigated farmland is prohibited by national resettlement and rehabilitation policy. The airport also lies closely to the Mundhe electricity station in Karad, which is the main station of electricity transfer from the Koyna hydroelectricity project. The tall electricity towers in the surrounding of the planned expansion pose a risk to air safety.

In addition to destroying local agriculture and rural livelihoods, the expansion of Karad Airport will accelerate climate breakdown through emissions from aircraft. Stay Grounded works to rapidly reduce aviation especially within Europe, which is responsible for 20 percent of global aviation emissions. But strengthening transport networks that are eco-friendly, sustainable and reliable is surely necessary in all regions.

The Stay Grounded Network thus reiterates its solidarity with the affected farmers and citizens protesting against Karad Airport expansion. We will keep following events closely and we urge you to prioritize the safety and livelihoods of your people over the development of damaging infrastructure. Please contact me if you would like to discuss these points further.