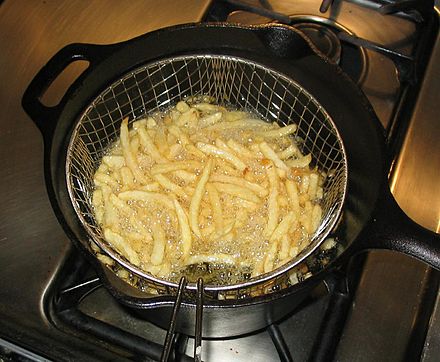 Biofuels are problematic and a false solution; real degrowth of the aviation sector is needed instead. The French organisation Canopée reiterated this in a new report that concludes that even using biofuels produced from “waste oils” for aviation has a devastating impact on biodiversity and land use. Instead, funding for new airport infrastructure should be stopped and the transition to alternatives to air travel should be supported as a means to reduce emissions. A summary by Diego Pedraza Lahoz.

In September 2021, Canopée, a French non-governmental organisation, published a report titled “The myth of the green plane – How flying with biofuels destroys biodiversity”. It clearly shows that the French government’s strategy to promote biofuels from “waste oils” for aviation is a dead end and risks increasing the pressure on forests. There is not enough of these oils in France to meet the needs of the aviation sector (by many degrees of magnitude) and, even worse, they are already being used for other purposes. Furthermore, this means that a higher demand for this type of biofuels will increase the risk of fraud, i.e. the falsification of documents to import palm oil as “waste oil”, and indirectly raises the demand for palm oil, encouraging the expansion of plantations at the expense of forests, as the European Union (EU) market absorbs a growing share of the world’s “waste oils” supply.

Biofuels are promoted as the miracle solution to decarbonise air traffic

The scheme of “carbon-neutral” growth from 2020 onwards (CORSIA or “Carbon Offsetting and Reduction Scheme for International Aviation”) was adopted at the international level under the International Civil Aviation Organisation (ICAO). CORSIA aims to reconcile the growth of air traffic with emissions reduction through different mechanisms: technological advances, operational improvements in air navigation, the use of alternative jet fuels and the use of carbon offsets. Yet, the bulk of the reductions before 2050 is to be achieved through the massive use of biofuels. The French government supports this initiative and has confirmed its intention to develop aviation biofuels.

Under CORSIA, no serious sustainability criteria have been established to ensure that aviation biofuels have no environmental impact; in fact, the introduced criteria are far from sufficient. CORSIA allows the use of first generation biofuels, which are produced from dedicated crops that affect soil and biodiversity and have similar or higher levels of emissions than fossil fuels. Thus, basing the bulk of emission reduction efforts on the incorporation of such biofuels is inefficient and counterproductive.

“Waste oils”, from the catering and food industries and, to a lesser extent, from households, represent a limited source that is insufficient to meet the demand for biofuels: half come from households and represent a diffuse source that is difficult to capture. For instance, the obligation to sort “waste oils” at source and recycle them in France only concerns professionals who produce more than 60 litres per year. Additionally, “waste oils” incorporated into road fuels in France come more often than not from outside the EU.

Due to the limited pool of “waste oils”, their various uses compete for access to resources. Consequently, importing these oils could delay the decarbonisation of exporting countries. The latter could be forced to utilise less sustainable raw materials for the production of biofuels as well as for animal feed, which is a traditional outlet for “waste oils”. Indeed, the incorporation of imported “waste oils” carries a risk of switching to virgin oils (like palm oil) or other carbon-intensive energy sources in the supplier countries.

Fraud in the form of disguising virgin vegetable oil as “waste oil” concerns up to a third of the latter oils imported in Europe. Already in 2016, the European Court of Auditors pointed out weaknesses in the biofuel sustainability certification system and highlighted the risk of fraud in “waste oils” due to the lack of verification of the origin of the raw materials. Several fraud cases are currently under investigation in the United Kingdom and the Netherlands. Canopée also found that several companies, including Total, carried out an import fraud system in 2011 and 2012 where imports of first generation American biodiesel produced from soya and rapeseed oils were disguised and distributed in the EU through Belgium as biofuel from Norwegian “waste oils”. By circumventing the anti-dumping taxes then imposed by the EU on biodiesel produced in the United States and by benefitting from a tax advantage in France linked to the double counting of biofuels from “waste oils”, it is estimated that the Belgian and French treasuries lost more than 24 million euros. 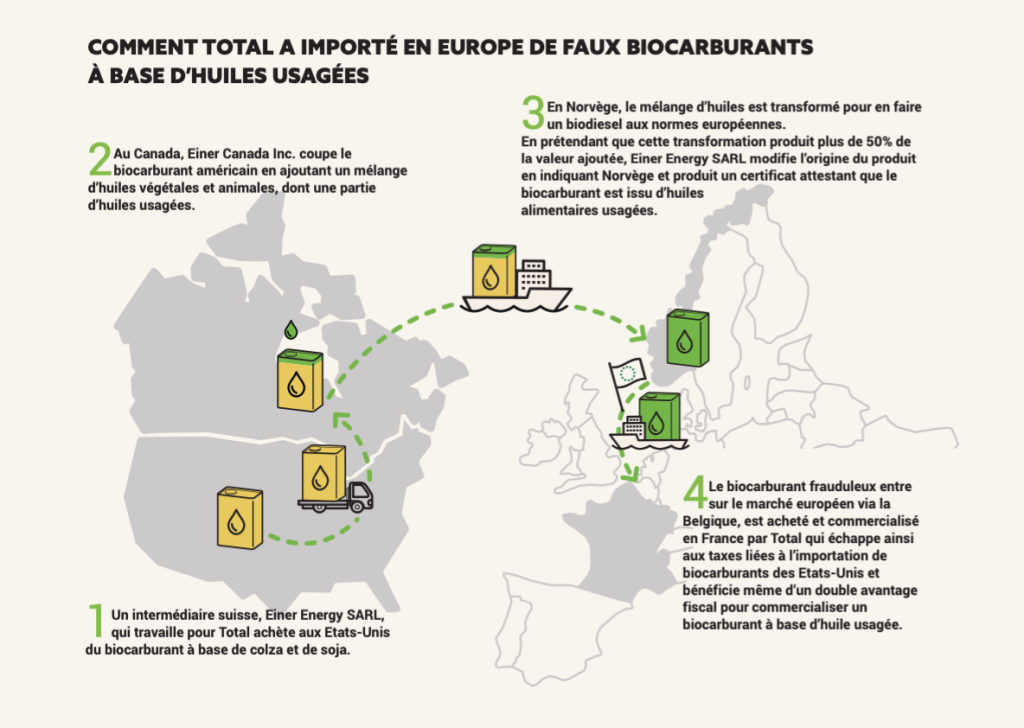 In May 2021, Air France made its first long-haul flight with 16% “waste oils” incorporated in the kerosene of its A350 aircraft from Paris to Montreal. These oils could theoretically reduce emissions – in the absence of substitution effects and fraud. For this reason, they are perceived by the aviation industry as a source of biofuels available in the short term. However, their incorporation into kerosene could be at the expense of incorporation into road diesel, given the limited and already valorised supply. Even if road transport found an alternative and no longer needed “waste oils”, the deposits would remain anecdotal. For example, the report calculates that only 700 return flights from Paris to Montreal could be carried out with biofuels produced from these oils in France.

Whether first or second generation, biofuels are not a realistic solution for decarbonising air transport. They can only meet very small residual needs after a drastic reduction in energy demand. Excessive incorporation targets are counterproductive and will impact biodiversity due to limited deposits, causing a competition for use and risks of fraud.

According to governments and the aviation sector, they will be able to mass produce second generation biofuels in the future. In reality, the promise of the next, supposedly more sustainable and advanced, generation of biofuels legitimises short-term inaction and continued investment in polluting technologies, both fossil fuels and first generation biofuels.

The two known techniques for converting biomass into second generation biofuels are not mature, particularly due to their cost, and are inefficient processes since they require large quantities of biomass. Despite having been researched since the beginning of the 20th century and more intensively in the last 15 years, the results have been unsuccessful: they have not led to the industrial production of this type of biofuels.

The use of wood and forest residues would lead to the depletion of forest soils by exporting the nutrients contained there and would harm forest biodiversity, as 25% of the species present in forests are dependent on dead wood. Similarly, crop residues are used to fertilise agricultural land by returning nutrients to the soil.

Moreover, burning biomass will obviously cause emissions to rise in the short term and the increased use of biomass and residues, whether from forests or agricultural soils, reduces the absorption and storage capacities of carbon sinks.

Finally, as with “waste oils”, the various biomass’ uses compete for resources: fertilisation of agricultural soils, fodder, etc. It is clear, biofuels produced from biomass will not be able to replace kerosene and significantly reduce emissions from the aviation sector.

Canopée concludes by making four recommendations to the French government and the members of the national parliament:

While developing new technologies and fuels may help, it cannot be a reason to delay emission reductions that are needed right now to mitigate the effects of the climate emergency. The only way to effectively reduce aviation emissions is to reduce air travel. To achieve this, we need effective regulations to limit air traffic. We applaud Canopée’s work and hope that legislators in France will listen to the science and act accordingly.

What are aviation biofuels?

As the aviation industry and governments find themselves under increasing scrutiny, the pressure to find alternatives mounts. One of their proposed solutions is substituting fossil kerosene with alternative jet fuels or so-called “Sustainable Aviation Fuels” (SAF). These are liquid hydrocarbon fuels that can be utilised in existing aircraft instead of kerosene fuels. There are two varieties of alternative jet fuel: biofuels and synthetic electro-fuels (or e-fuels). Biofuels are produced from various sources of biomass. First generation biofuels employ agricultural crops whilst the second generation uses industrial, agricultural, municipal or household waste (such as: used cooking oil, fat, corn husks, forest resources or food waste). The latter are also called biofuels from “waste oils”. More detailed information can be found in our Fact Sheet 4. E-fuels are produced using electricity and are explained in detail in our Fact Sheet 5. The aviation sector argues that by using fuel created with CO2 taken from the atmosphere and by blending the result with fossil fuels they will reduce their greenhouse gas emissions significantly. In general, biofuels cannot be supplied at the large scale the industry needs, drive deforestation as well as peat drainage, and cause land grabbing and human rights violations, including forced evictions and the loss of people’s food sovereignty.