Vienna/Barcelona, June 12th – In one month, on the 12th of July, the conference “Degrowth of Aviation” will start in Barcelona. 100 scientists, NGO experts and grassroots activists from Europe and all over the world will discuss strategies to degrow aviation. As a no flight conference, participants will travel to the conference over land, whilst those from far away will participate online. On the 14th of July, a creative action will take place to resist the Barcelona airport expansion and the rising problems of mass tourism. We invite journalists to participate in the conference and to register beforehand. Find a list of experts in the annex, and more information here: https://dev.stay-grounded.org/conference 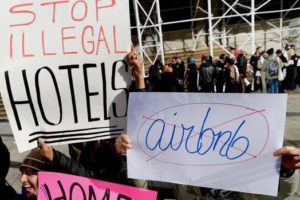 The conference will open the space to reflect and connect the problems of mass tourism in hot spots like Barcelona with the demands for reducing flights. Barcelona is the fourth most-visited European city, the first destination of Mediterranean cruise ships and the seventh largest European airport. This tourism industry leads to very serious impacts and conflicts for the local society and the environment, among them: poor work conditions; the expulsion of residents for the transformation of their houses into tourist accommodations; the increase of rental prices; the collapse of mobility and accessibility; high levels of noise, air pollution; and waste.
In this context, Spain’s national Ministry of Development and AENA, a state-owned company that manages the general interest in airports, plan the expansion of Barcelona’s airport in order to meet a demand of 25 million passengers more (the existing capacity is 70 million passengers) – an operation which will include the Girona-Costa Brava airport. The 14th of July, activists will draw a red line to show the limits to growth of aviation and tourism. 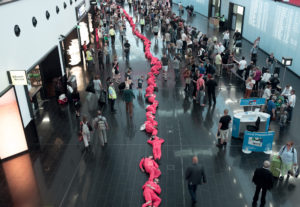 Globally, the damaging impacts of aviation on our climate is starting to be discussed more and more. The problem, however, is that none of the strategies in place that supposedly target aviation’s climate impact actually challenge the constant growth of the aviation sector. Instead, they pretend that flying could, in the future, become „climate neutral“ through technical improvements, biofuels and offsetting. The Stay Grounded Network, in its position paper, makes clear that those are false solutions. „The Illusion of Green Flying“ study points out the different short-falls and problems of the aviation sector‘s greenwashing strategy.
The conference “Degrowth of Aviation” will discuss the feasibility and benefits of several concrete measures to reduce aviation, among them: limits on domestic or short haul flights; institutional changes of travel policies; reducing airport infrastructure; fostering alternatives; touristic degrowth; and taxes on tickets and on kerosene.

A leaked European Commission report revealed that taxing aviation kerosene sold in Europe would cut aviation emissions by 11% (16.4 million tonnes of CO2) and would have no net impact on jobs or the economy, while raising almost €27 billion in revenue every year. A new European Citizens’ Initiative (ECI) was recently launched which needs to collect 1 million signatures during one year. The initiative that has been started by a group of students is supported by Stay Grounded. Representatives will also be present at the conference. Find the initiative here: https://www.endingaviationfueltaxexemption.eu

Stay Grounded Network
Stay Grounded is a global network that counters aviation and strives for a sustainable and just transport system. It consists of more than 120 organisations and groups around the world.