October 15th, 2018 – Protests around the world are rising against growth of air traffic and airport expansion, and its effects on the climate and local populations. The past two weeks, the new global network Stay Grounded conducted Global Action Weeks, with 27 actions taking place in 11 countries. The action weeks ended yesterday with an action and an international Stay Grounded conference in Vienna (12-14th of October), which was held along with the Back on Track network. Back on Track promotes night trains as an alternative to middle haul flights in Europe. 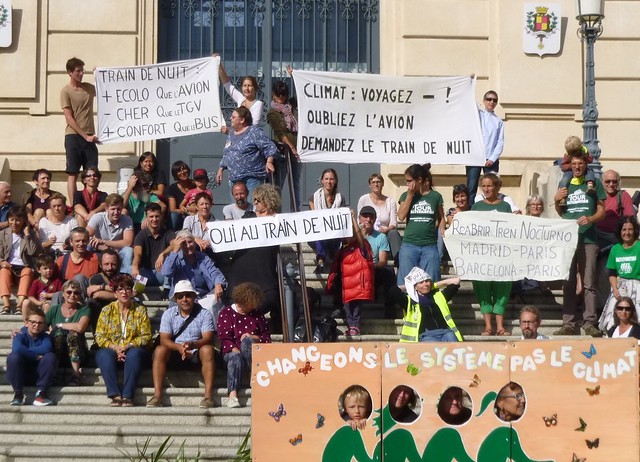 More than 120 organisations around the world have issued a Stay Grounded position paper outlining 13 steps for a transition towards a transport system that is socially just and ecologically sustainable.

In Europe this summer, soaring temperatures and escalating labour conflicts demonstrated that aviation has hit an environmental and social ceiling. Thousands of workers went on strike to demand better working conditions in the sector, while several tourist destinations suffered from overcrowding.

Mira Kapfinger, coordinator of Stay Grounded, said „These limitations mark actual boundaries. Aviation cannot continue its growth path, because it is impossible to maintain low prices and pay decent wages at the same time, and to expand tourist destinations without irreversible damage to their social and ecological structures“.

She added, „The new IPCC report leaves no doubt: the climate crisis demands an urgent reduction of air travel. It is also no option to increase the number of flights or expand airports without threatening the health and well-being of the communities and biodiversity around these airports.“

Around the world,  1200 airport infrastructure projects are planned or being built. In Istanbul, for example, a new mega airport with six runways is about to be finished, built in a protected ecosystem which once were the green lungs of Istanbul. Workers went on a strike in September because of bad working conditions and hundreds of deadly accidents at the construction site, and were heavily repressed.

In Mexico during the Global Action Weeks, indigenous communities protested against the Mexico City International Airport (NAICM), also a mega project with six runways, which would be built in a very sensitive ecosystem. Gabriela Vega Tellez from the “Peoples’ and Organisations’ Coordination of the Eastern Mexico State in Defense of the Land, the Water and its Culture” explained: „Right now, in indigenous territory, hills are being blown for extracting materials to fill the floor of Texcoco Lake in an attempt to prevent the new airport from sinking and flooding. Land is also taken from indigenous peoples and peasants for the construction of wind farms and a giant solar energy power plant to supply the new airport. They pretend it’s a green airport, and we know that this is a lie.”

Despite all the negative effects from aviation, industry and politicians refuse to face the true extent of the crisis, planning massive growth of air travel – while pretending the growth can be green. In Vienna, at the start of the Global Action Weeks, activists from Stay Grounded intervened in the opening of the European Aviation Summit in Vienna, interrupting EU Transport commissioner Violeta Bulc’s speech about the supposedly green future of aviation.

The counter-speech shed light on the problematic aviation greenwashing strategies of politicians and the industry, who pretend to achieve carbon-neutral growth of aviation through cheap and ineffective offsets, biofuels and speculative technologies that may never be realized. Instead, the activists made clear that the unfair privileges of the aviation industry need to be cut, and that kerosene, tickets and frequent flyers need to be taxed.