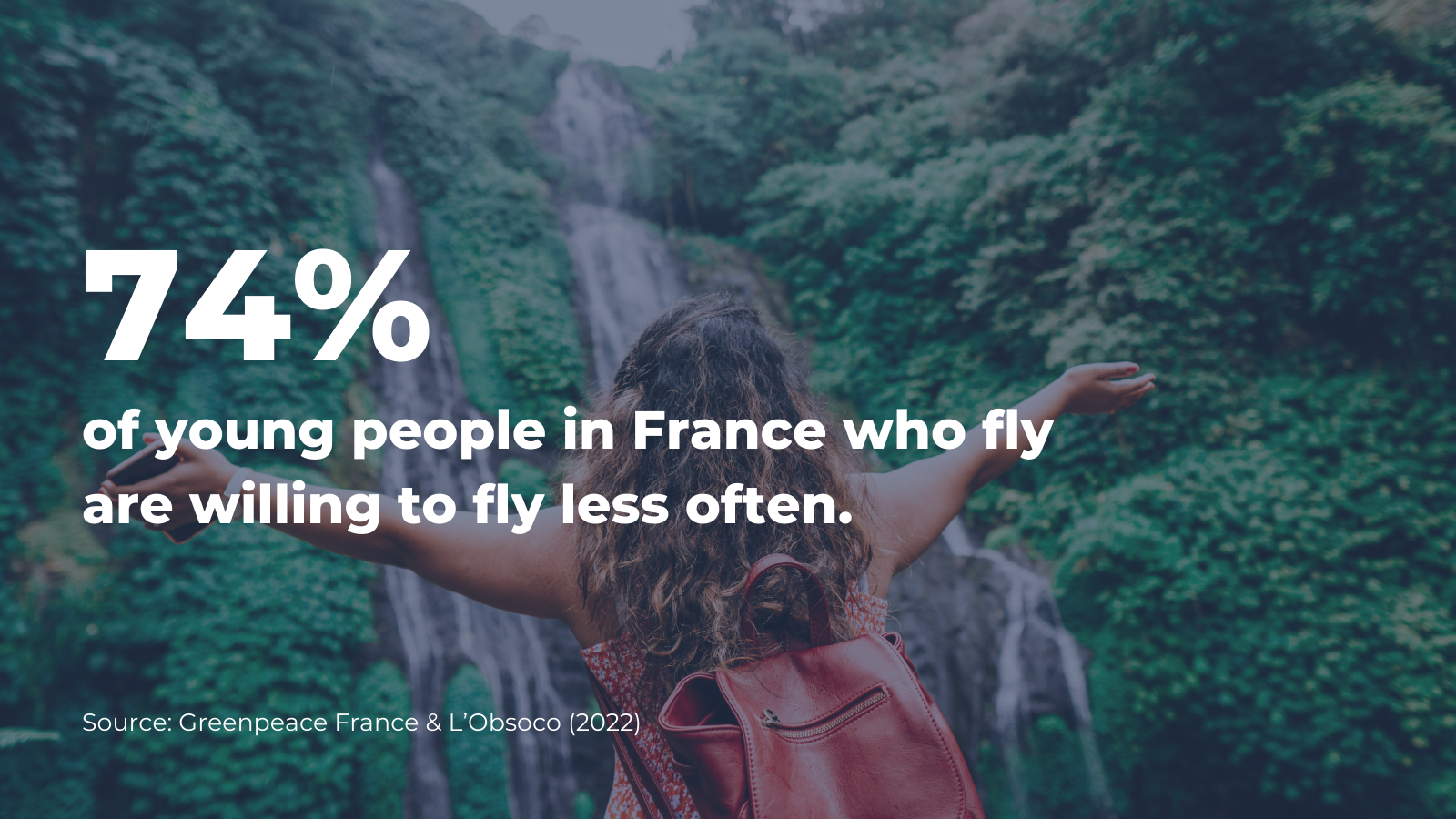 This summary article was first posted on Greenpeace France’s website. You can find it here in French.

This research on the travel practices of young French people, entrusted by Greenpeace France to L’Obsoco, analyzes the tourist practices of young people with regard to environmental issues, and in particular their relationship to the plane. It reveals that a majority of young people are ready to reduce the frequency of their leisure flights, although the ecological criterion is still secondary when choosing their holidays.

The first lesson of this research is that global warming worries young people: 80% of them think that the situation is very worrying or dramatic and that it is urgent to act for the climate. Better still, a large majority (76%) recognizes the need to make significant or radical changes in our lifestyles . Young people are ready to act in all areas of daily life: daily transport (79%), tourism (81%), food (87%), consumption (92%), energy (92% ), recycling (95%).

Only a minority often fly

A majority of young people (53%) do not, or very rarely, fly for leisure. Conversely, a third take it regularly (more than once a year), and 16% occasionally (once every two to three years). Highly qualified people (> bac+4) and those living in the Paris conurbation are particularly likely to fly at least twice a year for their leisure activities (respectively 27% and 25% compared to 14% of young people on average).

This observation should be compared with the results of the 2008 National Transport and Travel Study , which show that wealthy people and Ile-de-France residents use the plane more often. This is also revealed by the work of sociologists Yoann Demoli and Jeanne Subtil, according to which the plane has become much less democratized than one might imagine . For these two researchers, we are witnessing a “ multiplication of travel rather than a multiplication of travelers .”

No need for a plane to experience a change of scenery!

Seven out of 10 young people believe that it is not necessary to fly to feel a change of scenery and 88% believe that it is possible to have a good holiday without flying. Above all, this belief is found in roughly the same proportions among young people who fly: 63% for the first item and 86% for the second. In other words, whether their trips are regular or not, young people do not need the plane to feel out of place . Especially since 89% think that France and its neighboring countries are full of magnificent places.

Broad support to reduce the frequency of leisure flights, but challenges remain:

This is a major lesson from this study: 3 out of 4 young people agree with the idea that leisure flights must remain exceptional to limit their impact on global warming. Even the most frequent air travelers support this statement: 56% among young people who take 2 to 3 leisure flights every year, 71% for those who fly once a year.

All the proposals for reducing the impact of their travels on the environment are overwhelmingly among young people who take the plane: leaving less far (59%), traveling more slowly (61%), favoring less polluting modes of transport (63%). The idea of ​​leaving less often, even if it means staying longer, is even favored by 3 out of 4 young people, including those who take it regularly.

Despite this agreement in principle, young people do not choose their destination based on the ecological impact of their stay. The carbon footprint is even the last criterion mentioned in the choice of a mode of transport. At the same time, 38% of young people questioned say they feel guilty when they fly, and 1 in 5 feels pressure from those around them in the face of this practice, a sign that the social norm in matter begins to evolve.

This is the great paradox of this study: on paper, young people agree on the need to travel less often by plane, but these intentions are partly eroded when they go on vacation. Two hypotheses emerge from the study to explain this apparent contradiction: the lack of information on the pollution generated by air travel, and the lack of competitiveness of alternatives such as the train.

The role of the state in encouraging low-carbon travel

A lack of knowledge of pollution linked to the aviation sector

If young people know that flying pollutes, few are those who know how high the carbon footprint of each passenger is. Nearly 80% say they don’t know that a single long-haul can consume an individual’s entire carbon budget. However, a round trip to Rio de Janeiro produces 2.8 tons of CO2 equivalent for each passenger. This represents what each human being should emit per year by 2030, to hope to stay below 1.5 degrees of warming.

In the same way, the evaluation of the effectiveness of the various individual actions is imprecise. 24% of young people identify air travel as particularly harmful to the climate, compared to 40% for packaging and waste. For young people who fly, reducing the frequency of these flights has a much more powerful climate impact than reducing and sorting waste.

This observation is related to the efforts of airlines to minimize the impact of their flights on the climate. Half of the respondents thus think that carbon offsetting would make it possible to travel without polluting (an idea often induced by companies), whereas these initiatives do not make it possible to reduce emissions linked to aviation. Among the solutions proposed, 61% of young people are in favor of an “Evin climate law” , ie a pure and simple ban on advertising in the most polluting sectors, such as air travel.

For 38% of young people surveyed, the cost of the journey is a determining factor in choosing their holiday destination. This is the second most cited criterion after the natural setting (44%). In other words, a significant proportion of young people choose the place of their holidays according to the price of the tickets.

Given the importance of the cost criterion, the tax advantages offered to the airline sector appear all the more scandalous , since they penalize less polluting modes of transport such as the train. The State would also have its full role to democratize access to the train. Among the solutions mentioned to limit the impact of the air sector on the environment, that of offering a train ticket to each young person aged 20 to be able to travel for free in Europe is approved by 78%.