Roissy/Paris, October 9: Protest took off against the project of Terminal 4 (T4) at Roissy Airport, Paris, France: Stay Grounded Member Non Au Terminal 4 interrupted a meeting on the project’s public consultation organized by project developer ADP. The activists called for an alternative assembly of project opponents outside Airport’s House of Environment which led to a walk-out of two thirds of the audience. 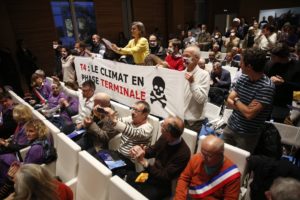 Two 16-year-old girls handed over letter to regional prefect Michel Cadot signed by a of eleven opponents addressed to President Emmanuel Macron, demanding the stop of the expansion plans at Roissy and declaring the end of talks with ADP, that had consumed to much time and ended in a “bogus consultation”. 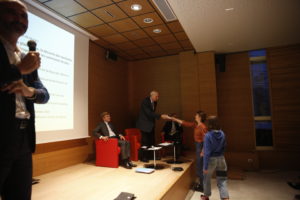 Handing over the open letter to the President

The new terminal at Roissy Airport, would accommodate an additional 40 million passengers, which could translate into 500 additional plane movements per day by 2037.

“It’s always the same people who talk. We had things to tell you!”, said the mayor of Saint-Prix, Jean-Pierre Enjalbert, to the representatives of ADP and the State. “We had a bogus consultation, that’s the result,” exclaimed Philippe Houbart, of the Collective against airpollution (Cirena).

News article about the protest (in French)