Back to the Future: Rallies for the return of the Paris-Hendaye night train and connections to the Iberian Peninsula 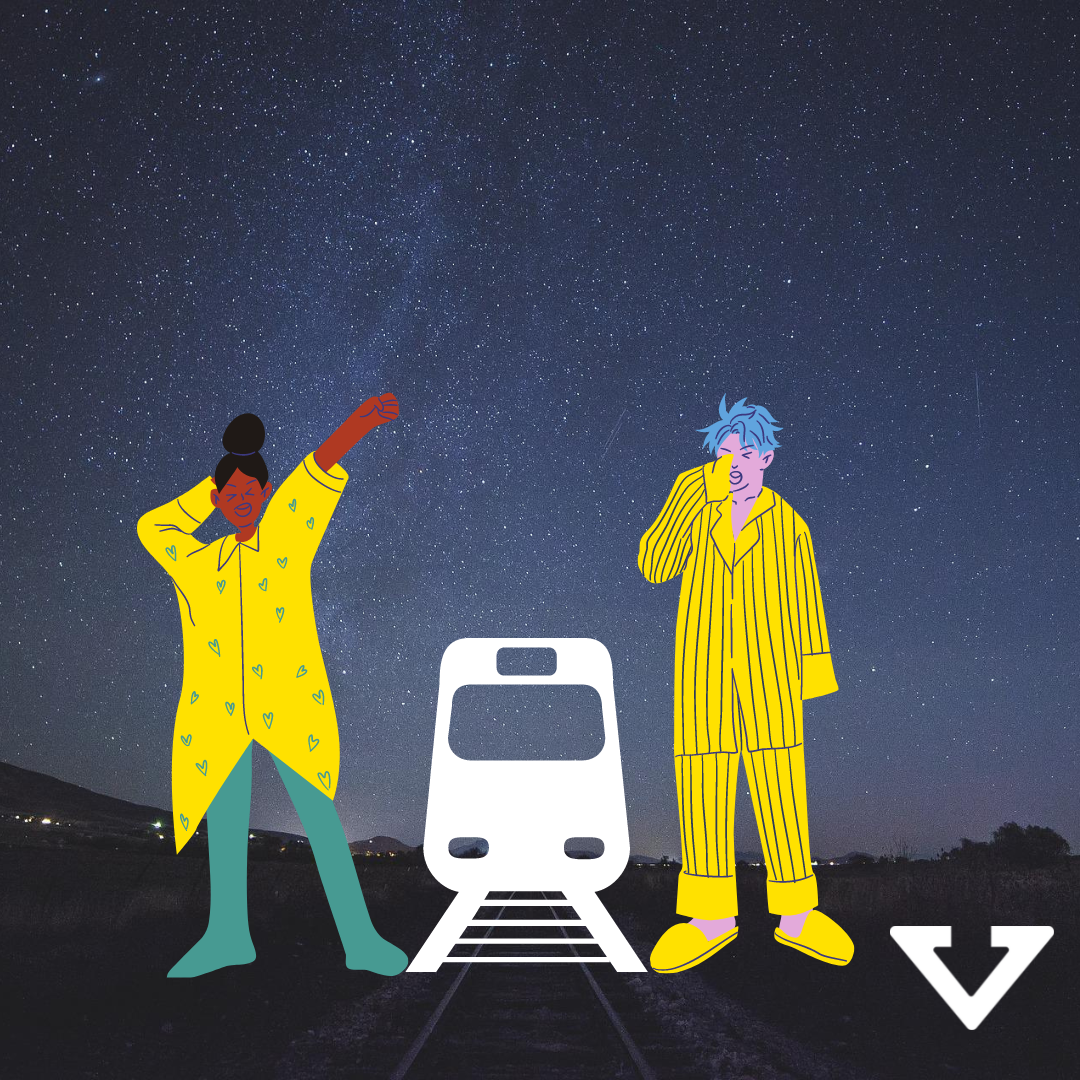 On July 2nd, 2022 — A night train renaissance is upon us with the Austrian Night Jet up and running and a Swedish night train to Brussels set to debut this year. In the fight for adding more night trains to this burgeoning network, Stay Grounded member organizations in Lisbon, Madrid and Hendaye gathered simultaneously in their train stations, to call for the return and improvement of a night train network, connecting their territories in a comfortable, fair and environmentally-friendly way.

It was a hot summer evening when people of all ages and backgrounds cheerfully gathered in the stations of three different cities, dressed in pajamas. With the revival of night trains already taking place throughout the European continent, people called for the urgency of a night train network that better connects Europe to the Iberian Peninsula. Banners in Portuguese, French and Spanish read: “Night trains: the future from night to day”.

In front of Hendaye train station, dozens answered the call from the collective Oui au train de nuit and welcomed in joy the passengers of the first night train arriving from Paris Austerlitz. The passengers clapped and cheered alongside the hustle and bustle on the platform, celebrating the return of this service. Nevertheless, “Oui au train de nuit” demands the Paris-Hendaye night train be extended until it reaches Irun in Spain, in order to connect with the Spanish rail network. Unmasking the shortsighted touristic vision of this train, through which the night train is slated to run for just two months a year, protestors demand the service to run daily, all year round, and with an earlier arrival time in Hendaye.

In Madrid, around twenty people gathered in front of the Atocha train station, demanding the return of the different night train services that existed before the pandemic, as well as international connections to Portugal and France. The atmosphere was festive: some of the participants wore pajamas, others blew whistles and still others improvised a bed upon which they laid, symbolising the comfort of night-time train travel.

The action aroused the interest of travellers who, as they left the station, approached the group of night train enthusiasts asking about the mobilisation and showed their support for the struggle. Many proudly shared their past experiences of travelling by night trains and asked why they had disappeared despite their enormous advantages.

For Ecologistas en Acción, despite the small size of the rally, it received considerable media attention. With this being just the first of many actions to come, the next night train manifestations will undoubtedly draw bigger crowds the next time around. The actions, say the Ecologistas, are here to remind people that:

Also in Lisbon, twenty people gathered, danced and made a human train in front of the historic Santa Apolónia station. ATERRA collective called for the immediate return of the night trains Lusitânia (Lisbon – Madrid) and Sud Express (Lisbon – Hendaye). They were suspended at the beginning of the pandemic, isolating Portugal from the European rail network – a situation that has not been seen since the two World Wars. The action received support from key Portuguese environmental organizations. As the city is threatened with mass tourism and a highly polemic airport expansion, the group showed their enthusiasm for energy-saving and eco-friendly night trains, called for a fair taxation of aviation, and proposed that a train journey costs, at most, half of the equivalent journey by plane.

After decades of lack of investment, the collectives are demanding their governments and railway operators cooperate in order to relaunch and implement an ambitious night train network in France and the Iberian Peninsula. They ask for accessible and easy to book train tickets, the electrification of all lines currently using diesel locomotives, and the ability to transport bicycles on the trains.

The network of night trains will help meet the objectives set by COP21, as the modal shift to this mode of transport can result in a 95% reduction in greenhouse gas emissions.