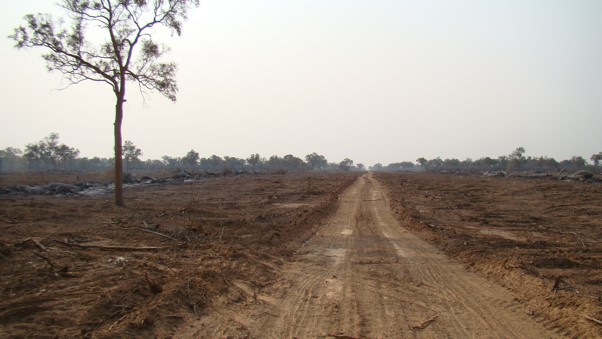 Asunción/London/Utrecht/Vienna, April 6 2022 – A new case study by NGOs detailing the environmental and social harm that would cause the Omega Biofuel refinery being built in Paraguay by the Brazilian company ECB has garnered an inaccurate response from the company in the form of a press release issued on 2 April 2022. The organizations behind the report–Centro de Estudios Heñói, Stay Grounded, Biofuelwatch and Global Forest Coalition–assert that Grupo BSBIOS Paraguay/ECB ignored several requests for comment and is denying the facts and merely engaging in greenwashing, a common practice for these biofuels projects that seek to obscure their true harm to biodiversity and human rights.

The organizations mentioned in the undated press release by Grupo BSBIOS Paraguay/ECB (signed by Analítica Comunicaçao), object to the company’s false statements.

In response to the claim by BSBIOS Paraguay/ECB that “it has not been consulted, does not agree and does not recognize the statements and assumptions”, the groups state that they made at least four attempts to contact company representatives. These attempts include the following:

The research and the writing for the case study was completed before BSBIOS released the “Sustainability Manifesto” mentioned in the press release. However, the document is a perfect example of greenwashing: a litany of vague claims such as “track the supply chain with an emphasis on human rights compliance”, with no reference to concrete actions to eliminate or mitigate the harmful effects of their projects on biodiversity and human rights among the affected populations.

The groups reiterate that all the information about the project included in the case study was taken from the official Environmental Impact Report presented by the company to Paraguay’s Ministry of the Environment and from news articles, all duly referenced in the study. Based on these facts, the study finds that “the refinery will bring more destruction, suffering and expansion of unsustainable agribusiness that perpetuates the extinction of Paraguayan native peoples only to produce fuel for other people’s planes.”

The case study warns that feedstocks to produce agro-kerosene at the Omega refinery are, whether directly or indirectly, linked to the destruction of ecosystems and biodiversity and have grave impacts on the local population, especially peasants and Indigenous Peoples. Problematic monoculture crops such as soybeans and pongamia trees cultivated to produce fuel for aviation aggravate land conflicts. Instead of addressing important questions and issues raised by the study, the company has sought to deny the facts. The expansion of aviation biofuels and its driver aviation growth must be stopped and reversed and incentives promoting the production of biofuels as a climate solution must end.

Heñói is a research center for the promotion of democracy, human rights and socio-environmental sustainability, based in Asunción, Paraguay.

Stay Grounded is a global network representing more than 180 member organisations campaigning for a reduction of air traffic and a climate-just mobility system, including local and national airport and climate campaign groups.

Biofuelwatch is an organisation based in the UK and US providing information, advocacy and campaigning in relation to the climate, environmental, human rights and public health impacts of large-scale industrial bioenergy.

Global Forest Coalition is an international coalition of NGOs and Indigenous Peoples’ Organizations defending social justice and the rights of forest peoples in forest policies.