Cusco’s New Airport Threatens Incas’ Past and Our Collective Future 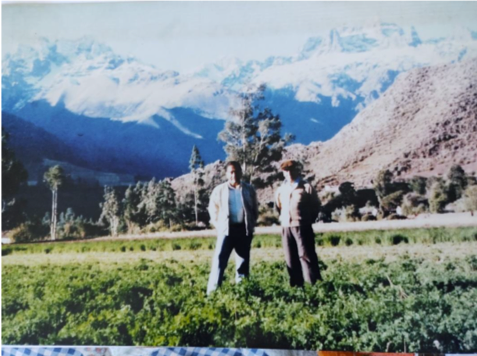 The prospect of an international airport in the Sacred Valley of the Incas in Peru has haunted the populations of Chinchero and Urumbamba for 40 years. With construction now underway, local initiatives and civil society organisations fear the destructive consequences of the Chinchero Airport and are calling for the cancellation of the project. On March 24, members of the local resistance, along with the Movimiento Ciudadano Frente al Cambio Climatico (MOCICC) and Stay Grounded came together in a webinar to discuss the full implications of the new airport. Read more about it below and why it is important to stop this mega-project.

An unnecessary and risky airport in Chinchero

The construction of the new international airport of Cusco in Chinchero started last November in spite of widespread outrage against it. Well-known international outlets and Peruvian media have reported on the potential impacts on the historical and cultural heritage as well as on watersheds in the region. The case of the Chinchero Airport has also been documented in the Map of Airport-related Resistance and Injustices, which is a joint project between Stay Grounded and the Environmental Justice Atlas.

Before construction of the Chinchero Airport began, the consortium led by the Korea Airports Corporation along with local and national governments ignored warnings issued by UNESCO over the location of the new airport near world heritage sites like Machu Picchu. A few months after the excavators started moving the terrain, the worst fears were confirmed: fertile land has been lost, the landscape disturbed, and the project advances over historical Incan and colonial roads.

Convinced that the project can still be stopped, and its worst consequences avoided, Unión Ciudadana por un Aeropuerto con Dignidad, MOCICC and Stay Grounded organised a webinar to raise awareness on the implications of the project and for incentivising the mobilisation of civil society voices.

Raúl Carreño, coordinator of Unión Ciudadana, kicked off the webinar by arguing that the region of Cusco simply does not need a new international airport. Carreño asserts that it will not be able to compete with Peru’s main airport in Lima or serve as a way to fight centralism in the country – two claims proponents of the airport make. Carreño also reminded webinar attendees that the Velasco Astete airport in Cusco still has enough capacity to accommodate more national and international flights, making the need for another airport redundant.

Unfolding destruction of the local ecosystems

Brutal environmental impacts from the new airport such as the reduction of flora and fauna, air and noise pollution, soil erosion, conversion of arable land into urban areas, and destruction of lakes and wetlands would greatly affect the ecosystems sustaining this well-preserved agrarian landscape of Chinchero and the surrounding region.

Carreño shared worrying facts about the presence of subterranean cavities in the subsoil in and around the site of the Chinchero Airport which cause the ground to cave in, posing a security risk for structures built there (see pictures below). Further, a combination of wind streams, low pressure pockets, proximity to the Andes mountain range, large periods of foggy weather and abundance of birds present risks for aeronautic manoeuvres. 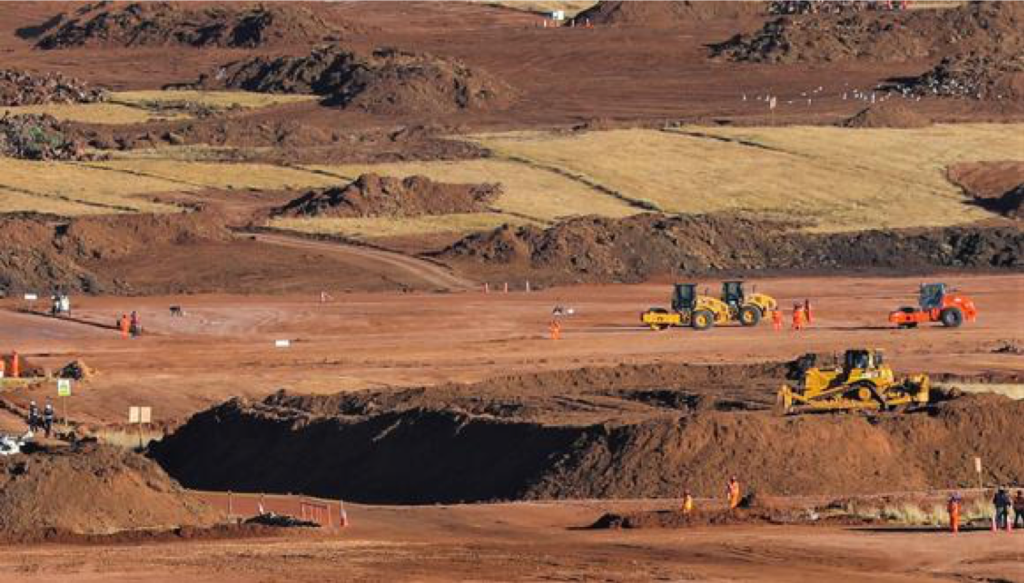 The impact of the new airport on water resources is also of great concern. Both Carreño and Yony Cruz, who is a farmer from Urquillos (Urumbamba province) and was a speaker in the webinar, raised alarm bells over the airport being located near the Piuray and Huaypo lagoons as well as wetlands in the Sacred Valley. Any contamination of the Piuray lagoon could make Cusco’s inhabitants increasingly vulnerable to water shortages, given that the city relies on the lagoon for 40% of its water supply. Cruz also brought attention to the fact that increased vulnerability to water shortages is especially worrisome since glaciers are rapidly shrinking in the region. This shrinkage is contributing to an already threatened water supply and reduced volume of water for irrigation.

Cruz showed photos of the snow-capped mountains of Calca: there are noticeable differences in the extension of the ice caps between the photo taken in the 1970s (on the left) and the one taken recently (on the right)

The trail of destruction from this mega-project in Chinchero has already wreaked havoc upon its peoples and their cultural heritage, the land and the built environment. Another webinar panelist, Enrique Estrada who is an architect in Cusco, denounced the Ministry of Culture, claiming it “has not done the assessment study of cultural impact”, which is mandatory under Peruvian law for the conservation of cultural patrimony. For Estrada, the incalculable architectural value of this patrimony extending through the region is enough to argue against the airport. According to Carreño, the airport construction and future air traffic are leading to the destruction of Incan roads and pose a threat to historical Incan and colonial villages. Cruz also fears that ongoing urbanisation linked to the airport project, paired with climate and water crises, may threaten the culturally significant and globally unique variety of white corn.

An open door for urbanisation and more (mass) tourism

Throughout the webinar, Carreño, Cruz and Estrada made one thing clear: this airport project is reinforcing the ongoing unrestrained urbanisation process in the Sacred Valley. The project is motivated by multiple interests linked to the tourism industry and is connected to skyrocketing prices of land, concentrating property ownership in the hands of foreign investors and hotel chains. As result of speculation and promises of new economic opportunities, the project is already leading to social division and unrest between communities and landowners. For Carreño, the false expectations people of the area hold that this project will improve livelihoods, paired with the real estate lobby, are the strong drivers of the Chinchero Airport project.

Another speaker named Joaquim Randal who is an entrepreneur from the tourism sector in Urumbamba asserted that promoting mass tourism as an economic anchor is unsustainable. Randal says, as long as the success of tourism is based on the number of tourists per year it “will have disastrous consequences, such as the degradation of the environment and cultural and historical patrimony.” The main tourist attraction in the region, Machu Picchu, cannot accommodate an endless number of visitors. Given this, Randal instead envisions a kind of slow tourism model with far fewer tourists visiting for longer periods of time, speaking against the construction of a new airport in Chinchero.

Representing Stay Grounded, campaigner Daniela Subtil showed how aviation’s contribution to climate breakdown is disproportionately the highest when compared to other means of transport per passenger per kilometre. This issue is aggravated by the fact air traffic is the most unequal form of transport, since only a small portion of the global population benefits from it, but the majority suffers from its harmful effects. Unequivocally, Subtil said that “to confront the climate emergency in which we live in, we must stop any kind of project that seeks to expand airport capacity”. 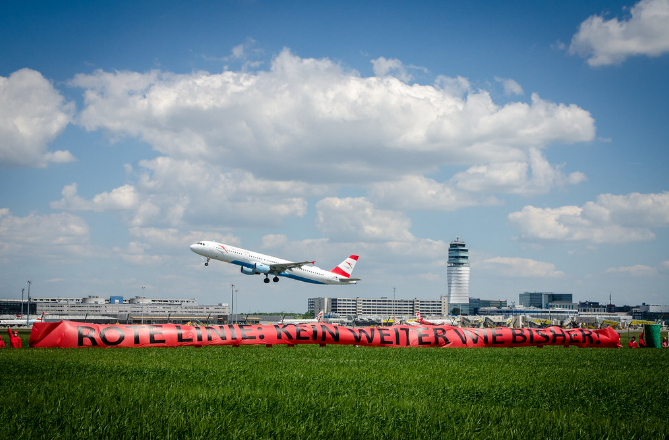 “Red Line: No More Business as Usual!”: Stay Grounded activists in Austria put up a red line to all airport expansions.

Finally, as the last speaker and coordinator of MOCICC, Henry Cordova echoed Subtil’s concerns. He reminded attendees that the commitments of the Peruvian government under the framework of the Paris agreement and consequent mitigation targets are not in line with the development of such a high-emitting project. Chinchero Airport, Cordova says, is misaligned with climate goals but was pushed through because “the state continues to prioritise global economies and the big capital, instead of prioritising local economies”. In his closing words and as a call to action, Cordova encouraged the audience to build political pressure on local and national authorities by joining forces in resistance against this project – a project that is disastrous for local ecosystems and culture, heritage sites in the region, the climate and which would perpetuate unsustainable forms of tourism.